Self-invention can cost a fortune. Luckily for Peggy Guggenheim, she had one. After her father’s demise aboard the Titanic, the then-teenage heiress spun her inheritance, her black-sheep status, and her passion for art and artists into a singular existence devoted to beauty, pleasure, and taste-making. She soon found her calling as a friend, lover, patron, and advocate of many a modernist painter, and in so doing, became the rare female collector to wield influence in the 20th-century art world.

Guggenheim left behind a vast trove and a much-attended museum in Venice when she died in 1979 at the age of 81. In “Peggy Guggenheim: Art Addict,” director Lisa Immordino Vreeland (“Diana Vreeland: The Eye Has to Travel”) explores her subject’s mutually beneficial — and at times mutually exploitative — relationship with her drug of choice, which allowed Guggenheim not just an escape hatch out of the confines of traditional marriage and motherhood, but also an identity, a purpose, and a steady stream of brilliant young men in her life and between her sheets.

At the documentary’s centerpiece is a newly discovered set of audio interviews that biographer Jacqueline Bograd Weld conducted with Guggenheim in the collector’s later years. Like the rest of the film, those tapes reveal a wealth of biographical detail that never adds up to a full portrait. Asked about this or that art-history personage, Guggenheim trills, “He was wonderful!” or “He was adorable!,” seldom elaborating more. “Art Addict” may be encyclopedic, but it’s all-too-rarely insightful.

Guggenheim may have been reluctant to speak more candidly to Weld because of the sexist backlash she received throughout her career. Even in the documentary, one of the few interviewees who knew Guggenheim diminishes her accomplishments by calling her “a little girl” who just wanted to show off her latest acquisitions to her friends. Whispers of her bed-hopping — especially given her plainness of face, which Immordino Vreeland emphasizes early and often, probably because Guggenheim’s contemporaries did as well — might explain why she spent the majority of her life in less-puritanical Europe, in Paris and London between the wars and in Venice after 1945.

Even with her rebellious hedonism, it’s difficult to embrace Guggenheim wholeheartedly as a feminist pioneer, despite the film’s efforts to frame her that way. Of the writer John Holms, posited as her one true love despite her two (brief) marriages, she recalls fondly, “He molded me.” The collector certainly persred in her ambitions to champion the creativity of (mostly male) artists in the face of the many forms of chauvinism she encountered, but her genius seems chiefly managerial, in knowing which artistic advisors to trust. En then, her galleries in London and New York, while celebrated and innovative, lost money or were short-lived. 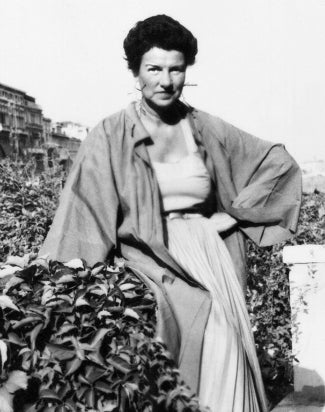 One of Guggenheim’s greatest coups was purchasing a painting a day on the of World War II — collecting works by artists who were on a list of important painters a prominent art critic had compiled. As Guggenheim tells it, the story of how she got her collection out of Europe is a real-life caper. Immordino Vreeland follows her subject’s lead by disappointingly breezing through the moral complexities of buying from world-class artists desperate to sell as Hitler’s army marched toward Paris, thus squandering an opportunity to play up the collector’s entrepreneurial acumen.

Amid the many pans across and zooms into Guggenheim’s personal photographs, an early talking head asserts that the self-described art addict transformed herself into “a kind of collector that never existed before.” But the documentary fails to provide enough historical context for what distinguished her from the centuries of patrons that came before her, other than brandishing her purse as a seduction tool.

The path to a modern self that Guggenheim carved out for herself is a narrow one — much like the appeal of this portrait of her. Fellow art addicts who match Guggenheim’s enthusiasm for the pre-war avant-garde, however, might find more to gorge on.