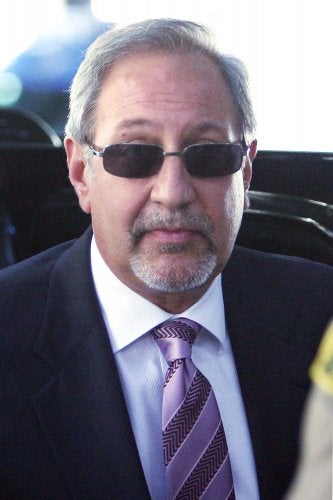 The big glass-cube Superior Court Building on Commonwealth Avenue once belonged to a health-insurance company. Visitors to Judge Peter Lichtman’s courtroom Wednesday morning found a case less in need of health care than of immediate triage.

Civil suit Busch v. Pellicano has been on file since 2004. Anita Busch, a former Los Angeles Times reporter covering the entertainment industry, claimed that “private eye to the stars” Anthony Pellicano caused her emotional distress by tapping her phone and memorably vandalizing her Audi by breaking a window and leaving a dead fish on it.

That fish bore a rose and a note warning Busch to “Stop” – a presumed reference to stories she was writing about either Michael Ovitz or Steven Seagal.

Busch’s civil suit got shoved to the back of the freezer during the years the feds brought up Pellicano and a crew of associates (including superlawyer Terry Christensen) on wiretapping and RICO charges.

Pellicano and an accomplice pleaded out to the charges, clearing the decks for Busch’s civil suit – and for allied suits filed by Keith Carradine and 23 other plaintiffs against two dozen defendants.

You know this will be a train-wreck of a trial because some of the case’s biggest lawyers are also its defendants. Hollywood mega-attorney Bert Fields is a defendant, as is Terry Christensen and his former firm, Christensen Glaser Shapiro et al.; ditto Alan Jay Weil, Greenberg Glusker et al., and Gorry Meyer & Rudd.

Some of the other defendant names include billionaire Kirk Kerkorian, Hollywood macher Michael Ovitz, director John McTiernan – along with the cities of Los Angeles and Beverly Hills, and, for good measure, the phone company. And, of course, Pellicano and many of his confederates from the criminal trials are on the hook for accusations by Busch and others who found themselves on the wrong end of Pellicano’s wiretap operations.

Wednesday was set aside for a status report, to be followed by motions.

“So I’ve got to hear this right off the bat?” an already frustrated Lichtman asked. “Every time I peel back one layer of the onion, there are 10 more.”

Mark Geragos repeatedly urged Lichtman to just go ahead and set a trial date, arguing that otherwise the “glacial speed” of the current procrastination would continue until the end of time. “People will start mediating, they’ll start settling,” promised Geragos.

“Whenever I set a date, it will be met with at least 100 motions,” lamented Lichtman. “That’s just a given – as night follows day. Einstein should do another theory – for court litigation. A theory of case management.”

Jones Day superstar Brian Sun allowed that he, too, would like to speed things up, but said lawyers needed to retrieve from the feds discovery evidence that wasn’t used in the criminal trials, and that process was burning up time.

No defendants were present during this kabuki theater of lawyering. In fact, the organizer of all this anarchy and paralysis, Pellicano, remains in an Arizona prison.

Lichtman eventually proposed Jan. 8 as the date that all concerned will be ready to roll.

Everyone in Room 322 quickly assented, but it remains to be seen if the reflexive requests for delays will soon trail off.

The mirror-like building on Commonwealth not only provides full-time work for local window washers, but houses this single case that promises to keep an army of attorneys gainfully employed for the near future as well.