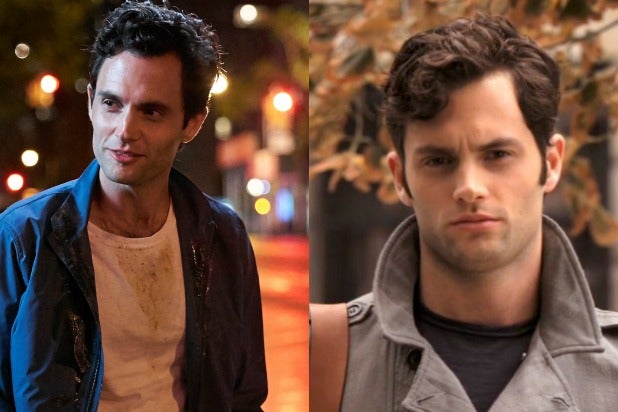 “Gossip Girl” fans who plan on tuning into Lifetime’s upcoming drama “You” just because it stars Penn Badgley aka Dan Humphrey aka Gossip Girl, are in for a treat. If you are a Dan fan, Badgley says you will see “parallels and comparisons” between his former CW character and his new role, Joe, that “are not lost” on him.

“You know, certainly there are parallels,” Badgley told reporters during a panel for the new Greg Berlanti and Sera Gamble series, at the Television Critics Association press tour Thursday. “Not the least of which is that I’m playing both of them,” he joked.

“I’d say the first scene of the first episode, by every measure Joe might appear to be Dan and then he diverges. Also, as time goes on probably [I’m] less interested in and also more accepting of the fact there is no way to control people’s perception of what it is they are watching and if people want to see the similarities and focus on them then that’s fine because they’re there. And whatever they see that really is new, that’s there as well, you know.”

Also Read: Greg Berlanti's 'You' Gets Season 2 Renewal From Lifetime Ahead of Series Premiere

The show stars Badgley and “Once Upon a Time’s” Elizabeth Lail, and follows an obsessive, yet brilliant twenty-something who uses the hyper-connectivity of today’s technology to make the woman of his dreams fall in love with him. And if you remember how Dan was the master manipulator behind the majority of “Gossip Girl”s drama, well, you see the connection there.

And so does Badgley, who said, with a laugh, “the parallels and comparisons are not lost on me.” “I can only imagine, you know, like the worst version of an ad: If you like ‘Gossip Girl’ this one is gonna be a killer,” he joked, imitating a dramatic commercial voiceover.

Oh, and if you were wondering if the former CW star is interested in a “Gossip Girl” reunion and if it will ever happen, he says that “question has no answer.” But then he added, “I don’t think it will ever happen.” Well, OK then.

“You,” an adaptation of the Caroline Kepnes novel of the same name, hails from Berlanti Productions and Alloy Entertainment in association with Warner Horizon Scripted Television and A&E Studios. Berlanti, Gamble, Sarah Schechter, Leslie Morgenstein and Gina Girolamo serve as executive producers.

Lifetime announced before the TCA panel that it had handed an early Season 2 renewal to the psychological thriller, ahead of its series debut next month.