A lot of very funny people had a lot of funny jokes on Twitter Thursday night at the expense of U.S. Rep. Marjorie Taylor Greene, the Georgia Republican whose resurfaced Facebook post caused the term “Jewish Space Laser” to trend.

Greene is well known for holding extremist, racist and antidemocratic political views and for promoting a litany of insane conspiracy theories, including QAnon. But on Thursday, an old Facebook post resurfaced by Media Matters revealed what may be her most insane — and most racist — conspiracy theory of all: that lasers controlled by Jewish people caused the deadly 2018 California wildfires.

And that led “Modern Family” Danny Zuker to crack: “Call me a Luddite but I’m perfectly happy with my Jewish Space Inkjet.”

Call me a Luddite but I’m perfectly happy with my Jewish Space Inkjet. https://t.co/ggp2DB6qX6

Yes, the recently-sworn in congresswoman really said that. In the now-deleted post, preserved by Media Matters, Greene wrote that there were “too many coincidences to ignore” regarding the fires, and opined that they weren’t a natural phenomenon at all. Instead, and we swear we aren’t kidding, she theorized that: 1) the Rothschilds, a wealthy Jewish family frequently mentioned by Nazis and other racist groups who advance horrific anti-Semitic conspiracy theories; 2) Teamed up with PG&E and the government of California; 3) To deliberately cause the fires using; 4) A laser from space; 5) In order to clear out land for a high speed rail line.

Greene, who has come under increasing scrutiny for her far-from-the-mainstream views, wrote that just two years ago. And lest you think we’re kidding, here’s a screenshot of the post, courtesy again of Media Matters. 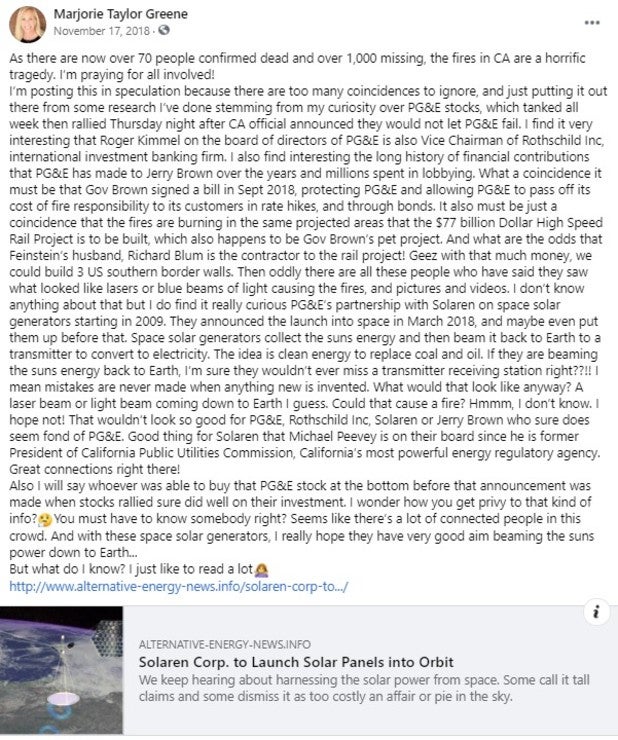 OK, caught up? Good. Now you know what “Jewish Space Laser” means. Freaked out? We get it. So we’re going to skip right to the very good jokes to help cheer you up despite knowing that that the sitting U.S. congresswoman, who was just given a plum committee assignment by her party even after her other extremist views came to light, wrote that.

First up, comedian Patton Oswalt, who really just owned the night with this joke you can literally hear in your mind.

Shit I’m gonna be muttering, “Jewish Space Laser” to the tune of “Paperback Writer” all weekend.

Next, “Crazy Ex Girlfriend” co-creator and star Rachel Bloom made us LOL, literally OL, with this video clip poking fun at the scramble to write a bunch of parody songs inspired by “Jewish Space Lasers.”

I wish crazy people like this would stop thinking I’m controlling space lasers because I’m Jewish when in truth it’s because I’m GAY and FUN. https://t.co/gMW667VKl7

And we’re always here for a Mel Brooks reference.

All you people pretending not to know about the Jewish Space Laser, when @MelBrooks told us all about it ages ago. https://t.co/uJ4TWdHXAl

Read on for some more very fun jokes about this not very fun thing.

The secret Jewish space laser was great for my sons’ bris, but the wildfires are a step too far. https://t.co/cGs967pKig

I have questions about Rep. Greene's theory that the California wildfires were started by the Rothschilds using a space laser in order to clear land for high-speed rail https://t.co/mZ2nL5luwz