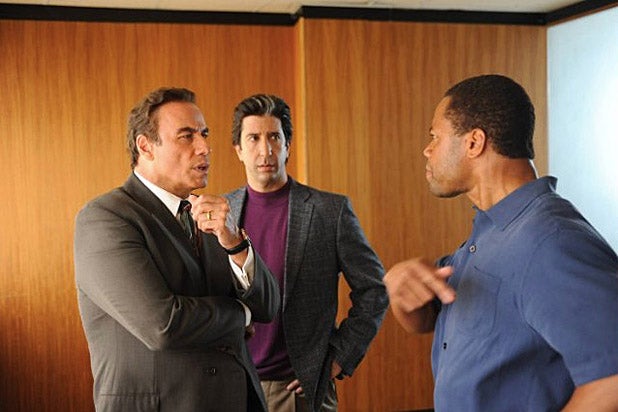 Just as the trial of the century was compulsive viewing in 1995, FX’s “People v O.J. Simpson: American Crime Story” was must-see TV on Tuesday, and the dramatization of the infamous murder case set social media ablaze.

Starring Cuba Gooding Jr., as the former NFL star who was found not guilty of murdering his ex-wife Nicole Brown Simpson and her friend Ron Goldman, John Travolta as attorney Robert Shapiro, Sarah Paulson as prosecutor Marcia Clark, and Courtney B. Vance as attorney Johnnie Cochran, the show’s premiere was the top trend on Twitter all night.

Viewers appeared to be instantly hooked on the series, with many complaining that it wasn’t streaming on Netflix so they couldn’t binge watch, and another saying: “Well, I guess I know what I’ll be watching the next 9 Tuesdays.”

“That was as close as perfection as FX has ever done it… Amazing cast, truly captivating… I can’t wait for more,” another fan wrote.

Some Twitter users jumped on a recent hot topic of debate by asking if Simpson, who was an NFL running back for the Buffalo Bills and San Francisco 49ers for 10 years, could have suffered from CTE (chronic traumatic encephalopathy). “In hindsight I’m wondering if#ojsimpson did have that head injury disease that football players get-he was so likable,” one user wrote.

“OJ was truly out of his mind,” was another blunt comment.

“Living thu this case, I’d forgotten how aware Kris Kardashian Jenner was of her friend Nicole’s abuse and did nothing,” was a further critical assessment.

“O.J. Simpson should’ve got the death penalty. Not for murdering 2 people but for giving us the Kardashians,” was another more tongue in cheek response.

The 10-episode anthology series is based on the book titled “The Run of His Life: The People v. O. J. Simpson” by journalist Jeffrey Toobin, exploring the chaotic behind-the-scenes dealings and maneuvering on both sides of the court, and how a combination of prosecution overconfidence, defense shrewdness, and the LAPD’s history with the city’s African-American community gave a jury what it needed: reasonable doubt.

That was as close as perfection as FX has ever done it… Amazing cast, truly captivating… I can't wait for more ! #ThePeoplevOJSimpson

#ThePeoplevOJSimpson Movie about #OJSimpson and the murder of Nicole. I really hope he isn't making money off her murder.

O.J. Simpson should've got the death penalty. Not for murdering 2 people but for giving us the Kardashians. #thepeoplevojsimpson

I can't deal with the fact that I can't binge watch #ThePeoplevOJSimpson ????

#ThePeoplevOJSimpson reminds me #CelebrityLivesMatter and that people who have thrown a ball well can kill people without consequence.

Well, I guess I know what I’ll be watching the next 9 Tuesday’s. #ThePeoplevOJSimpson

I can't believe how many "no spoilers please" tweets I'm seeing about #ThePeoplevOJSimpson…do people realize that this actually happened?

So now I’m hooked. Guess I’ll have to watch every week, thanks FX. #ThePeoplevOJSimpson

OJ was truly out of his mind. #ThePeoplevOJSimpson

This is sad but funny! Don't kill yourself in Kim's room but you can screw your broad in her bed! #icant #ThePeoplevOJSimpson

#ThePeoplevOJSimpson Hurry up and get to this part.. That's what we're all waiting for! pic.twitter.com/Ny2za0B2HF

Set Designer be like…"Get me all the Joey Lawrence posters you can find, trust me it's gonna make sense" #ThePeoplevOJSimpson

Living thu this case, I'd forgotten how aware Kris Kardashian Jenner was of her friend Nicole's abuse and did nothing. #ThePeoplevOJSimpson

He murdered his wife and then went to the funeral. OJ is Red from The Five Heartbeats. #ThePeoplevOJSimpson

Wow…they had to throw in The Kardashian family #thepeoplevojsimpson

#ThePeoplevOJSimpson gives us all chance to do something we didn't get to do 20 something years ago, Discuss on Twitter