There’s a small scene in the latest season of “Orange is the New Black” where Gina, in order to get the attention of a prison guard, sticks her hand down her pants to get a handful of period blood. She then paints it on her face to imply that she’s injured.

Gina is a minor character and her role in Season 5 is minimal, but her act of defiance stands out. And no, I’m not talking to her standing up to a guard.

Before a recent crop of women-led shows like “Orange is the New Black,” “GLOW” and “Broad City,” I don’t recall having seen period blood on the small screen. I’d seen characters talking about having a period and some periods on the big screen, along with primarily male characters reacting to the monthly event with confusion and sometimes outright incompetency (this scene from “Movie 43” comes to mind). But in television, it’s been strangely absent.

For the longest time, period blood wouldn’t even be shown on television, even when it was the subject. Take, for example, maxipad commercials which usually feature liquid pouring over the product to test its absorbency. But that liquid is almost never red. Rather, it’s blue.

In 2011, artist William Chyr wrote on his blog about how he incidentally created the first ad to ever feature menstrual blood while he was a marketing intern. He said he wanted to create a simple message about how a pad could work, so the illustration in question featured the smallest representation of blood, just a small dot in the middle. But it was red, and that was considered revolutionary.

“It was certainly never my intention to break new ground in the world of feminine hygiene marketing, and the attention that the work received came as a bit of a shock,” he wrote.

But now you can have something like what happens in the final moments of the first season of “I Love Dick.” As Chris (Kathryn Hahn) is about to have sex with the titular Dick, she gets her period, a flow so heavy that it gets on Dick’s hands and she has to leave. The final shot of the season is of her walking down a dirt path in Dick’s clothes, with blood dripping down her leg.

“It wasn’t the original ending when we wrote the script, then we thought it made a good ending for the series,” showrunner and co-writer Jill Soloway told TheWrap when asked about why they ended it with menstruation. The idea of a woman getting booby trapped by her own body just as she’s about to get what she wanted seemed hilarious.

“I think it’s funny to all of women experience,” Soloway said. “There have been moments when you’re finally about to culminate something and it’s ruined. I think.. I don’t know I just love this rushing forward of her body.”

There’s a certain taboo surrounding periods in media. Lauren Rosewarne, the author of “Periods in Pop Culture: Menstruation in Film and Television, told TheWrap that at it’s most basic, it comes down to general disgust surrounding bathroom imagery.

“We don’t tend to show any kind of bathroom event on screen and thus periods are no different,” she said.

Also Read: Betty Gilpin Says Shows Like 'GLOW' Are a 'Step In The Right Direction' For Women On Screen

It’s true that excrement doesn’t get shown on TV too often, even if it’s all natural and everybody produces it. Censorship is more strict on broadcast, especially. “South Park” gets away with showing feces or urine on TV because it’s animated and because it’s supposed to be shockingly gross.

The only difference is that a period comes out of a vagina, but even that seemed to be off limits when it came to gross-out humor. To mention “South Park” again, you can make jokes about periods, like about a male character getting one as a way to show he’s feminine, but showing blood is a step too far.

The period, in a lot of these scenarios, is treated like a disgusting unknown, or the reason for a stereotype. Did you know that some women have mood swings around their periods? Ask Amy Schumer, who did a whole sketch on her show about what happens when a female President gets her period. Or Donald Trump, who said Megyn Kelly was being harsh during one of the Republican debates because she had “blood coming out of her wherever.”

But in recent years, vagina blood has been mentioned more often. In “Broad City” Season 3, there’s a nearly episode-long joke in which Ilana wears period pants as a distraction to get weed through TSA security. In “GLOW,” a wrestler seeks to make fun of another by pretending to have a miscarriage — spraying blood all over the ring. 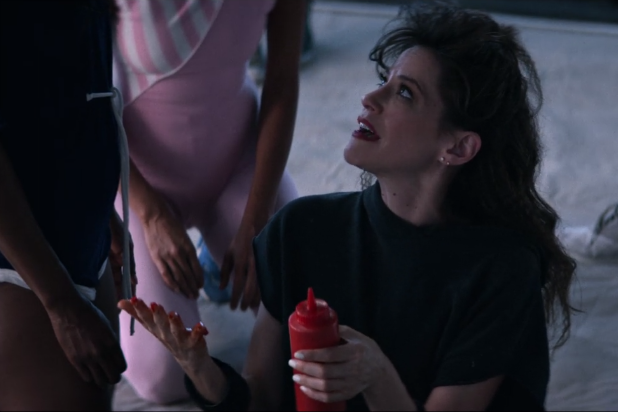 It’s not just in jokes. We are seeing open discussions of menstruation among characters. In a “GLOW” locker room scene, the women swap tampons and maxipads and talk about how ridiculous the diaper-like pads are. In “Orange is the New Black,” access to feminine hygiene products becomes a demand during a prison riot. The second episode of “Girls” showed Hannah and Marnie talking openly about period stains.

Also Read: Jill Soloway Says 'I Love Dick' Is the Show for 'Women Filled With Rage'

For women who are taught not to speak about their periods or are part of a culture where it is considered unclean to even have one, the subject can be difficult. A recent survey found that one in five British women are uncomfortable talking about them. Another conducted by the International Women’s Health Coalition and the menstrual health app Clue of around 90,000 women globally found over 5,000 different euphemisms for them, showing that people will go to any length to not mention it by name.

It was just a matter of time before people started talking.

“I think we’ve reached a point socially where women are tired of their natural cycle being a lame trope on screen and women are actively working to change the narrative,” said Jen Lewis, the artist behind “Beauty in Blood,” a photography project that uses period blood as the subject. “I think we’re beginning to see these more realistic portrayals of menstruation in media because women are tired of their bodies and experiences being misrepresented.”

Women and non-binary people are still misrepresented behind the camera in television. In the 2015-16 Boxed In report released by the Center for the Study of Women in Television & Film shows that while there are more women in roles on screen, men make up most of the workforce. The study found that 60 percent of programs employed four or fewer women, compared to how seven percent of shows employ less than four men.

There have been a number of women-created shows that have gotten more attention. But in some cases, like the “GLOW” locker room scene, which was written by a man, it’s not a matter of just putting women at the head of a show, but including more accurate female characters.

But according to the Boxed In report, the number of female characters on TV has been on a small decline — so what has changed? Rosewarne attributes it to shows keeping up with the edgier, changing times.

“With the rise of cable TV (that is less beholden to the sensibilities of broadcast TV) programs are looking for ways to be more cutting edge and of the Zeitgeist. Menstruation is one way to do that,” Rosewarne explained.

The “zeitgeist” in question could just be a general visibility in women-led programs, even if the number of them hasn’t changed percentage-wise.

With more women at the helm, it stands to reason that more conversations about menstruation will occur and more realistic, sometimes gross depictions will be shown. Ilana’s “period pants” in “Broad City” might not have been needed, but the realities of hoping your period doesn’t bleed through your tampon is very real.

Going further than just including these conversations, television can then approach the subject with dignity. It’s not just a cause for women to get emotional, but a thing that happens that can have narrative weight or add to a character.

In the most recent season of “Fargo,” Nikki seeks to take her revenge against Emmit by writing a message for him with her own period blood, leaving her own used tampon behind so that he knows where it came from. It’s a truly feminine act to use the period, which tends to be ignored, against others. It also says something about Nikki that she resorts to using her menstrual cycle to great effect.

“Menstrual product manufacturers would have us all believe that our periods are easy, breezy times of the month and for many menstruaters that’s just not the case,” Lewis said. “So I think what we’re seeing on TV with these new bloody, messy scenes is a reflection of what our periods are actually like in real life.”

And more of a reflection of what life is actually like.