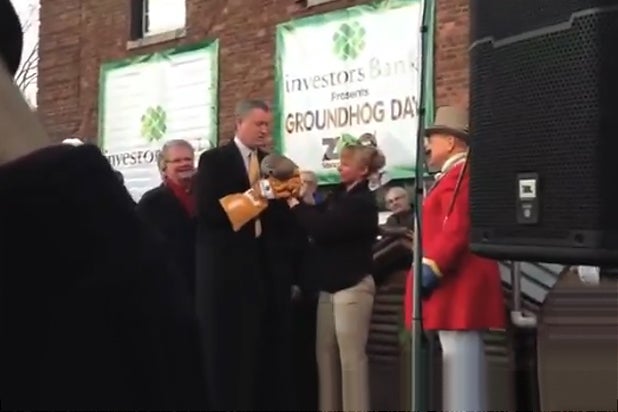 Here’s a scandal even Olivia Pope would have trouble cleaning up.

The groundhog, who was on loan from the Staten Island Zoo and was standing in for famous rodent Chuck in predicting six more weeks of winter on Groundhog Day on Feb. 2, wriggled from six-foot-six-inch tall de Blasio’s hands, plummeted to the ground and was found dead a week later. And while a link between the annual festivities and her cause of death has not been determined, the finger of blame is being pointed at the fall.

However, animal rights group PETA does not put any of the blame on the Mayor. “We are sure that Mayor Bill de Blasio, who cares about animals, will be devastated,” the group said in a statement to TheWrap. “The blame lies with the organizers, and PETA has been after them for years — and still is — to stop disturbing and tossing around a groundhog for this gimmick.”

A necropsy at the time showed signs of internal injuries and bleeding “that would be consistent with a fall” — but one more recent than the groundhog’s ill-fated encounter with Mr. de Blasio, said Staten Island Zoo spokesperson Brian Morris, according to the Wall Street Journal. “We don’t know how it fell. We don’t suspect any foul play or anything like that,” he added.

The mystery over what ultimately caused the rodent’s demise is not stopping PETA calling for alternatives to the tradition that was immortalized in the 1993 Bill Murray comedy “Groundhog Dog,” chronicling the never-ending celebration in Punxsutawney, Pennsylvania.

“This groundhog needs to be the last to suffer and die for a cruel and bizarre holiday,'” PETA concluded. “Just as ball runs are replacing bull runs, the stupid, thoughtless, and inhumane groundhog gimmick needs to go, too.”