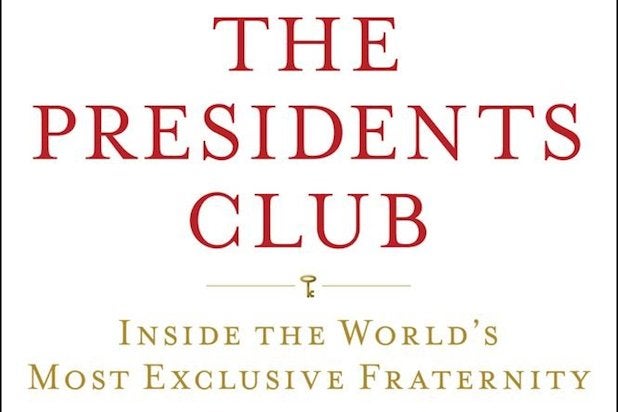 Award-winning documentary filmmaker Peter Jones has acquired the rights to “The Presidents Club,” the 2012 New York Times best-selling book by Time editors Nancy Gibbs and Michael Duffy. The book is about how presidents from Herbert Hoover through Barack Obama have worked with — and sometimes against — each other when they were both in and out of power, TheWrap has learned.

“Nancy and Michael have masterfully crafted intimate and untold tales of friendship, competition and conspiracy inside the world’s most exclusive fraternity,” Jones said. “My intention is to make a thrill ride of a film. I cannot imagine a more fascinating prism through which to look at American history and politics since the end of World War II.”

Jones expects to complete the documentary for release in 2016, which is the next presidential election year.

The documentary will rely on many of the same interviews, unpublished letters and untold stories in “The Presidents Club,” as well as archival material from presidential libraries.

Jones said, “These stories will unfold employing primary source material. We will use the words of the presidents themselves from interviews, oral histories and news reports. We will conduct original interviews with key players, but my intention is to use only their voices over freshly shot footage, archival film and photographs. This material, much of it transferred to HD for the first time, will be visually stunning.”

Jones earned his first Primetime Emmy Award in 1997 for his documentary “Judy Garland: Beyond The Rainbow” and won his second Emmy in 2006 for “Stardust: The Bette Davis Story.” His documentary “Inventing L.A.: The Chandlers and Their Times” earned a Peabody Award in 2009.

Jones will be joined by longtime collaborators Mark Catalena and Brian Tessier. Catalena will be the film’s co-director and editor, while Tessier will be a producer and primary researcher, responsible for unearthing previously unseen material. “These guys form my dream team,” Jones said.

Gibbs and Duffy are represented by Robert Barnett of Williams & Connolly in Washington and by Michael Rudell of Franklin, Weinrib, Rudell & Vassallo, P.C. in New York.