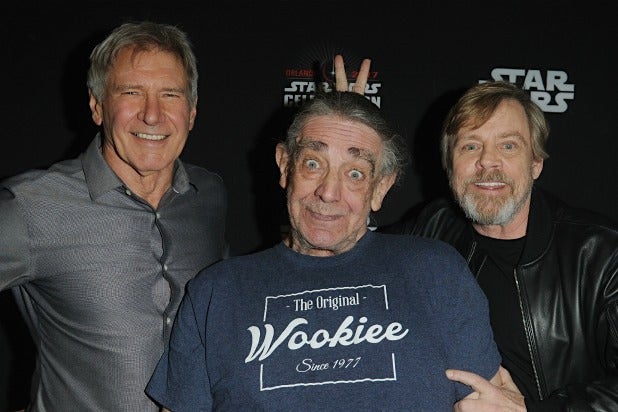 Peter Mayhew, the actor who originated the role of Chewbacca, was fondly remembered by his “Star Wars” family as a “gentle” man with a “big heart.”

Mayhew’s family announced the actor’s death on Thursday via Twitter: “The family of Peter Mayhew, with deep love and sadness, regrets to share the news that Peter has passed away. He left us the evening of April 30, 2019 with his family by his side in his North Texas home.”

George Lucas, who discovered the 7-foot-2-inch actor and cast him as the Wookiee warrior in “Star Wars Episode IV: A New Hope,” called Mayhew “a wonderful man.”

“He was the closest any human being could be to a Wookiee: big heart, gentle nature…and I learned to always let him win. He was a good friend and I’m saddened by his passing,” the director said in a statement.

Lucasfilm president Kathleen Kennedy added, “We are deeply saddened today by the news of Peter Mayhew’s passing. Since 1976, Peter’s iconic portrayal of the loyal, lovable Chewbacca has been absolutely integral to the character’s success, and to the ‘Star Wars’ saga itself. When I first met Peter during ‘The Force Awakens,’ I was immediately impressed by his kind and gentle nature. Peter was brilliantly able to express his personality through his skillful use of gesture, posture, and eyes. We all love Chewie, and have Peter to thank for that enduring memory.”

In a statement to The Hollywood Reporter, Harrison Ford, who played Mayhew’s big-screen best friend Han Solo, wrote: “Peter Mayhew was a kind and gentle man, possessed of great dignity and noble character. These aspects of his own personality, plus his wit and grace, he brought to Chewbacca. We were partners in film and friends in life for over 30 years and I loved him. He invested his soul in the character and brought great pleasure to the ‘Star Wars’ audience.”

Ford continued: “Chewbacca was an important part of the success of the films we made together. He knew how important the fans of the franchise were to its continued success and he was devoted to them. I and millions of others will never forget Peter and what he gave us all.  My thoughts are with his dear wife Angie and his children.  Rest easy, my dear friend …”

“He was the gentlest of giants — a big man with an even bigger heart who never failed to make me smile & a loyal friend who I loved dearly– I’m grateful for the memories we shared & I’m a better man for just having known him, Thanks Pete,” Hamill wrote.

J.J. Abrams tweeted a photo of a handwritten note, which read: “Peter was the loveliest man … kind and patient, supportive and encouraging. A sweetheart to work with and already deeply missed. XO.”

Much more than Chewie to me…My heart hurts…I will miss you my dear friend…thanks for the great memories! #RIPPeterMayhew #StarWars pic.twitter.com/0DfCo59zpG

My heart breaks hearing #PeterMayhew has passed. What a kind soul. So fortunate to have met and witnessed his love & affection for #StarWars fans everywhere. RIP pic.twitter.com/ydIG0tYPop

RIP Peter Mayhew. To create a beloved character with warmth and humor is a testament to any actor’s spirit. To do it under a half ton of yak hair takes a true legend. ❤️❤️

The @WaltDisneyCo mourns the loss of our beloved #chewbacca portrayer, #PeterMayhew. Peter was larger than life in so many ways…a gentle giant playing a gentle giant. Rest in peace.

A public memorial for Mayhew is planned in early December at EmpireCon in Los Angeles.