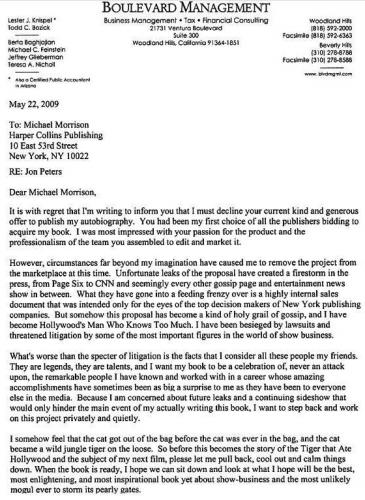 Barely 24 hours after details of his book proposal leaked widely onto the Internet, Hollywood producer Jon Peters has turned down a $700,000 offer from Harper Collins to publish an autobiography promising salacious details from his life with Barbra Streisand and as the head of Sony Pictures.

“Unfortunately leaks of the proposal have created a firestorm in the press, from Page Six to CNN and seemingly every other gossip page and entertainment news show in between,” he wrote in the letter dated Friday, May 22. “I have been besieged by lawsuits and threatened litigation by some of the most important figures in the world of show business.”

One individual familiar with the deal said the advance for the book was $700,000.

Streisand took the trouble to deny Peters’ claims about her in a statement on her website. "The claims and statements attributed to me in Jon Peters’ book proposal are either completely distorted or simply untrue," she wrote.

The Hollywood rumor mill was ablaze on Friday over the leaked proposal; speculation mounted that News Corp chief Rupert Murdoch, the parent company of Harper Collins, decided to pull out of the deal as too troublesome.

But at least one prominent insider was convinced the entire incident was an exercise in attention-grabbing by Peters. "It’s arranged hype," said this insider. "I don’t think there’s been any lawsuit at all."

Peters is already a somewhat notorious figure in Hollywood, a former hairdresser who rose through ambition and drive to cut a swath through the industry in the 1980s. Along with his former partner Peter Guber, he led Columbia- Sony Pictures and legendarily spent a fortune there before losing his job.

Their exploits became the subject of “Hit and Run,” by Kim Masters and Nancy Griffin. In the book, the authors depict Peters as a barely literate producer, and a supreme Hollywood slickster.

In recent years Peters has returned to the industry as a producer of the "Superman" franchise, but has suffered public problems, including sexual harrassment suits by former employees.

In December 2008 Peters sued his past general counsel Ronald Wayne Grigg. Peters claimed that while he was incapacitated after a serious illness, Grigg defrauded him, hiring an assistant with the company’s money, stealing his computers, and drugging and raping two women on Peters’ property.

Full details of the book proposal for "Studio Head," co-written with William Stadiem, were published at DeadlineHollywoodDaily.com on Thursday. Strangely, though, many of the same details were published a month ago by Masters in The Daily Beast, without an ensuing firestorm.

In the noted Hollywood tradition of bridge-burning, the proposal included numerous outrageous stories and anecdotes, most of them depicting Peters as a street-smart  macho man bedding his way across a sea of Hollywood goddesses, while bitch-slapping the town’s most feared figures, including Barry Diller and Ray Stark.

In one such story, two girlfriends called Peter from Washington to whisper: "I just f—ed the President."

In another, he offers up stories about his former girlfriend Barbra Streisand – "he saw her  becoming even hotter under his Pygmalion skills – and how producer Ray Stark had molested her during an audition.

Peters, a former boxer, confronted Stark, according to the proposal, and "picked the tiny mogul up as if he were a puppet and swung him around the room."

The proposal also tells of Peters having "bitch-slapped" Barry Diller, the former television mogul turned new media baron, at Sandy Gallin’s house in a scene straight out of Starsky & Hutch.

"The joke was on Diller when the furious Jon lifted Diller over his head, slammed him against a wall and bitch-slapped him for le tout gay Hollywood to see," goes the proposal.

That was nothing compared to a "whore and drug fueled global joy ride" to get Jack Nicholson to sign on to "Batman." "Jon bascially turned staid Claridge’s into the Playboy mansion," said the proposal. "Jack couldn’t say no to a good time like this."

In a letter written by his manager Lester Knisper, Peters said he was turning down the offer, but intended to write the book and then revisit his options.

"Before this becomes the story of the Tiger that Ate Hollywood and the subject of my next film, please let me pull back, cool out and calm things down," he wrote.

As to why Peters chose to write a tell-all at this stage, it can only be guessed. After being arrested for driving under the influence of drugs (pills, he says), Peters was in a severe car accident in 2006, when his SUV flipped over on the Pacific Coast Highway. By his own admission, he was loaded at the time.