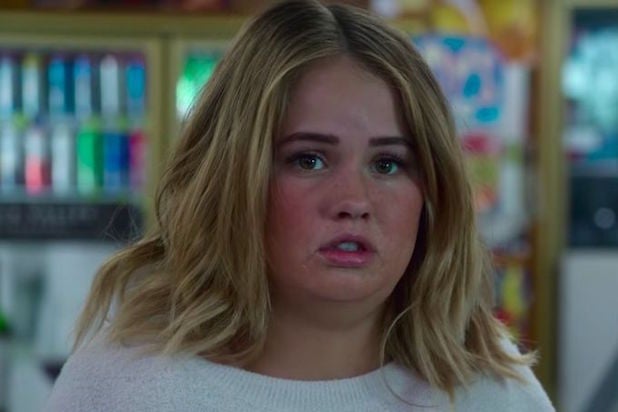 A petition calling for Netflix to cancel its upcoming dark comedy series “Insatiable” has already gained 120,000 signatures, five days after Twitter commentators criticized the trailer for being “toxic” and promoting fat-shaming.

The petition, titled “Stop the Release of Netflix’s Body-Shaming Series ‘Insatiable,'” was created four days ago on Change.org.

Netflix dropped the trailer for “Insatiable” last Thursday. It showed Patty (Debby Ryan) as an overweight girl who loses weight after having her jaw wired shut and becomes the proverbial hot girl out for “revenge,” as she puts it. Alyssa Milano plays her mother on the series.

A Netflix spokesperson declined to comment on the petition. Representatives for Ryan and Milano did not immediately respond to TheWrap’s request for comment.

The petition criticizes the series for “feeding into part of a much larger problem” surrounding eating disorders, diet culture, and the objectification of women’s bodies.

“For so long, the narrative has told women and young impressionable girls that in order to be popular, have friends, to be desirable for the male gaze, and to some extent be a worthy human … that we must be thin,” the petition reads. “This series will cause eating disorders, and perpetuate the further objectification of women’s bodies. The trailer has already triggered people with eating disorders. Let’s stop this, and protect further damage.”

The trailer became the subject of backlash soon after it was released, with Twitter users arguing that the plot promotes a “harmful” idea that fat women must become thin in order to be attractive and successful.

“So, anyone aware of Debby Ryan’s new movie coming to @Netflix?” wrote one detractor. “It’s called Insatiable, and I have a few problems with it, mainly that it’s essentially fat shaming people.”

So, anyone aware of Debby Ryan's new movie coming to @Netflix? It's called Insatiable, and I have a few problems with it, mainly that it's essentially fat shaming people. Allow me to explain more.

Milano responded to the criticism with a tweet on Thursday afternoon, writing, “We are not shaming Patty. We are addressing (through comedy) the damage that occurs from fat shaming. I hope that clears it up.”

She was replying to a tweet from Twitter user @thecursedempath, who had criticized Milano after her initial tweet sharing the trailer, writing, “Really…..so she wasn’t able to take revenge until she was ‘conventionally attractive’? This is disgusting! You are the face of the Women’s Movement and THIS? Shame on you!”

We are not shaming Patty. We are addressing (through comedy) the damage that occurs from fat shaming. I hope that clears it up. Also, this article does a good job of explaining it more: https://t.co/WoR8R7TjqR #Insatiable https://t.co/GFkDdsn1uh

Ryan also addressed the criticism in an Instagram post on Saturday. “We’re not in the business of fat shaming. We’re out to turn a sharp eye on broken, harmful systems that equate thinness with worth,” she wrote. “Twelve years into my own struggles with body image, struggles that took me in and out of terrible places I never want to go again, things I choose every day to leave behind, I was drawn to this show’s willingness to go to real places about how difficult and scary it can be to move through the world in a body, whether you’re being praised or criticized for its size, and what it feels like to pray to be ignored because it’s easier than being seen.”

Lauren Gussis, the show’s creator, responded to the backlash on Twitter, sharing that she was suicidal when she was 13 and later developed an eating disorder and “the kind of rage that makes you want to do dark things.” She added: “The show is a cautionary tale about how damaging it can be to believe the outsides are more important — to judge without going deeper. Please give the show a chance.”

This is my truth. @insatiable_ pic.twitter.com/xbs3YtueCQ

The petition was created by Florence Given, a body positivity activist and artist from London. “A lot of my curvier friends who have struggled their entire lives to accept their bodies were feeling incredibly hurt, and insulted by the premise of this series,” she told Refinery29. “Once I started the petition, thousands of girls were flooding my comments sections and my DM’s telling me that they were glad someone took a call to action, because it had triggered their eating disorder. If the show has the power to do this before it’s even been released, I can’t imagine the breeding ground this will become for eating disorders, and further insecurities.”

Bo Burnham’s film inspired us to look back

Bo Burnham's debut film "Eighth Grade" is getting praise for its realistic and touching portrayal of growing up today. It builds on a long line of movies that deal with the awkwardness of coming of age. Here are 17 of them.