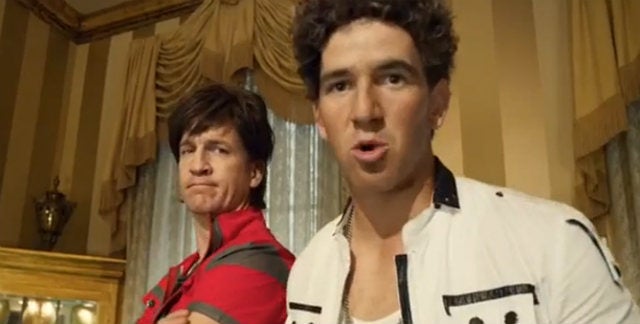 What can't the Manning brothers do? Rap, apparently.

The best — or worst, depending on how you look at it — line: "Look at this guy using his phone as a phone/your phone ain't for calling/your phone's for footballing!"

The most noteworthy of the video itself has to be the ridiculous wigs. A close runner-up moment is when dad Archie takes place in the nonsense, sitting atop a golden throne while wearing an outfit that might have made Elvis blush.

Near the end of the commercial, Peyton asks, "What do you think Alexander Graham Bell would say if he saw you watching football on your phone?"

Then Eli rips through a huge painting of the inventor to declare, "Who cares? Dude's dead."

Watch the clip, and then watch football on your phone: