Peyton Manning won the weekend after visiting “Saturday Night Live” and appearing on the Weekend Update, where he deconstructed the plotlines of Netflix’s “Emily in Paris.” But on Monday’s episode of the “Tonight Show” he had a big confession.

Despite his detailed and nuanced review of the show, Manning admitted to “Tonight Show” host and “SNL” alum Jimmy Fallon that he has yet to binge the Lily Collins-starring series. 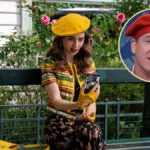 And that’s not likely to change.

“Not sure I’m going to in the future,” he continued. “I feel like I know so much about it now, Jimmy.”

While he may not watch, Manning wouldn’t be surprised to get a call from Netflix about more than a cameo.

“But I think I’m going to be asked to be in Season 3, like a big part!” Manning said.

On Sunday night, “Emily in Paris” star Collins reacted to Manning’s Weekend Update appearance writing on Instagram, “Peyton Manning in a beret is everything I didn’t know I needed. Still dying over the @emilyinparis-inspired Weekend Update on @nbcsnl last night…”