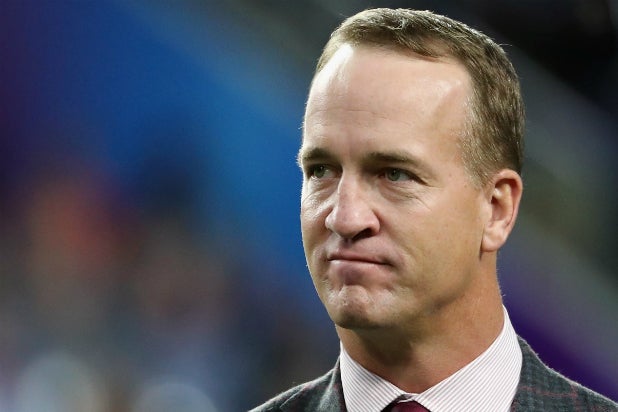 Retired NFL quarterback Peyton Manning is in talks with both Fox Sports and ESPN to become a color analyst for either “Thursday Night Football” or “Monday Night Football” games, TheWrap is told by multiple people with knowledge of the conversations.

Manning’s agent, Sandy Montag, is apparently looking for $10 million per year for his client’s services. That would be an enormous sum of money for the actual amount of work involved — but Manning’s star power and crossover appeal just might be worth it. After all, Fox just dropped $3.3 billion for those “Thursday Night Football” rights, so why stop writing massive checks now?

Plus, the “TNF” ratings have been pretty rough after the last few NFL seasons and a mainstream star might be just the kick in the pants the newest night in football needs.

And just one season into his own color commentator role at CBS Sports, retired Dallas Cowboys QB Tony Romo has kicked down the door and opened up wallets for the service’s of Papa John’s former BFF.

Also Read: Peyton Manning Says He's Not Running for Senate: 'Zero Interest in Being a Politician'

Beyond the $10 million price tag, Manning and Montag have another request — they’d like Mike Tirico as their play-by-play man. There’s just one problem with that: Tirico is currently employed by NBC Sports, the place he left ESPN’s “Monday Night Football” to be.

Tirico, who is also repped by Montag, is interested on heading to rival Fox once a week should this work out. Bob Costas’ Olympics successor actually wanted the “Thursday Night Football” gig when he moved to NBC, but the NFL blocked him, insisting instead on the primetime “Sunday Night Football” team of Al Michaels and Cris Collinsworth pulling double-duty.

Such an agreement would finally bring Tirico back to calling weekly NFL football. It also wouldn’t be unprecedented: Fox and ESPN currently share Alex Rodriguez for baseball, for example.

If the Tirico-share doesn’t work out, however, we’re told Joe Buck is also being considered to take on the new Thursday night duties (with or without Peyton), and will continue to work Sundays with Troy Aikman.

ESPN needs Manning even more on Mondays, however. The self-proclaimed Worldwide Leader in Sports is losing popular “Monday Night Football” color analyst Jon Gruden back to the NFL, where he will again coach the Oakland Raiders. And ESPN doesn’t exactly have a ton of talent to backfill the crucial role: lesser-know Louis Riddick has expressed interest in taking over the spot, and while another ex-NFL quarterback, Matt Hasselbeck, is more of a name and also waiting in the wings — he’s certainly no Manning.

Should Manning end up at ESPN, it is unlikely Tirico will join him back there. Tirico’s replacement, Sean McDonough, seems to have job security at “Monday Night Football.”

James Pitaro, the brand new president of ESPN, has a tough call ahead of him. On the one hand, landing Manning fills a need and could make a huge first splash. On the other, overpaying for a guy to work a couple of times a year might be a bad deal for a company hemorrhaging cable subscribers.

Fox Sports and ESPN declined comment when reached by TheWrap. We did not immediately hear back from our request for comment from Montag’s The Montag Group.