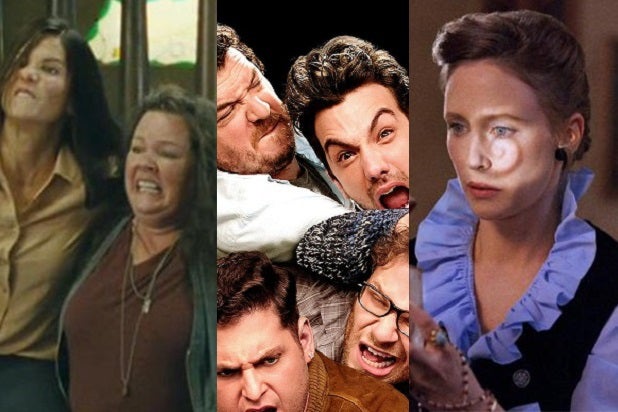 On average, PG-13 movies make more than three times what R-rated films do at the box office in the U.S.

So why is Hollywood releasing far more R-rated movies than any other kind?

This year, PG-13-rated films have accounted for 52 percent of the overall box office grosses, well ahead of films that the Motion Picture Association of America rated R (27 percent), PG (16 percent) or G (3 percent). And none of the year’s top ten movies is rated R.

Why would Hollywood spite itself like this? The short answer: The pervasive desire to keep it real creatively, then turn profit on downstream platforms. Awards can be a factor, too.

But it’s much more complex than even that.

The biggest box-office money-makers, like “Iron Man 3” or “The Hunger Games: Catching Fire” are purposefully PG-13 to connect all “four quadrants” – both young and old, and men and women. If a film is rated R, you’re eliminating the young crowd (mischievous teen theater-hoppers notwithstanding).

The movies in Universal’s $2.3 billion “Fast & Furious” franchise, for example, have been and will always be PG-13, according to distribution chief Nikki Rocco.

“You wouldn’t want to restrict the people who love the movies and have been die-hard fans, and that’s the way it is with almost every major franchise,” she said.

But it can cut the other way, as it will with the studio’s “Ted 2,” the upcoming follow-up to Seth MacFarlane’s 2012 hit based on a potty-mouthed teddy bear.

“Would the core audience for ‘Ted’ really want it to be anything but R?” she asked.

Key to the trend is that the majority of movies’ business plans don’t call for making hundreds of millions at the box office. Provided your production and marketing budgets are right-sized, a $10 million opening can be enough to spur ancillary earnings into the black, and there’s always potential for a breakout.

CBS Films appealed to the MPAA Ratings Board this summer after its “Last Vegas” initially received an R, and made enough edits to get it to a PG-13. It’s become the company’s biggest earner ever with nearly $60 million domestically, a figure it likely wouldn’t have hit with an R rating.

Paramount this week firmed up a PG-13 rating for “Anchorman 2,” which was critical if the comedy sequel is going to hit the lofty box-office haul analysts are projecting.

Also read: Who Has Greenlight Power in Hollywood? A Studio-by-Studio Guide

Sometimes the studios and filmmakers will fight to avoid an R rating for the sake of a broader potential audience, but not always. The Halle Berry thriller “The Call” might have been cut to achieve a PG-13, but distributor Sony Tristar and the filmmakers decided not to fight, according to producer Michael Helfant.

“I know we left a chunk of business on the table, but we didn’t fight it, because we would have had to have made so many changes that it wouldn’t have been the same movie,” he said. Things worked out; “The Call” made $68 million worldwide on a $13 million production budget.

There are some films – Fox Searchlight’s “12 Years a Slave,” for example – that have story lines that are almost bound to be R. Knowing the audiences for that sort of film are going to be more mature, studios don’t mind an R, since few youngsters are likely to be attracted to the film anyway.

For some movies, theatrical releases are mainly to build buzz, and are secondary to VOD and downloads in terms of revenue.

The Weinstein Co.’s specialty label Radius made its R-rated biopic “Lovelace” available on VOD and for downloads on the same day it hit theaters, and the Amanda Seyfried drama has made far more from those platforms than the $346,000 it took in at the box office.

But when studios are shooting for blockbusters numbers — typically with a movie that has blockbuster-sized marketing and production costs — it’s understandable that they don’t want to risk an R-rating.

Movies with PG-13 ratings accounted for six of this year’s top ten films. Two were PG and two others – Disney’s “Monsters University” and Universal’s ‘Despicable Me 2” – were G-rated.

“The Heat,” the raunchy Melissa McCarthy-Sandra Bullock buddy comedy is the year’s highest-grossing R-rated film with nearly $160 million, but ranks just No. 13 on the list of the year’s top grossing domestic movies.

R-rated and envelope-pushing laughs also propelled hits including the Jennifer Aniston pot comedy “We’re the Millers” and “Identity Thief,” with McCarthy and Jason Bateman. “The Hangover III,” “This Is the End” and “Jackass Presents: Bad Grandpa” all rode raunchy laughs to box office success.

But along with the horror film “The Conjuring,” those are the only R-rated films among the year’s top 35 films at the box office.

There can be nuance involved in the more family-friendly ratings, too. For example, there’s a sweet spot that studios aim for with movies that target young kids. A PG rating, and especially a G rating, can cause older teens to steer clear, but seeing a PG-13-rated movie can make younger kids feel more grown-up.

There are exceptions to the box-office realities of R-rated films. Mel Gibson’s “The Passion of the Christ’ is the top-grossing R-rated movie domestically ever with $370 million domestically in 2004. And last year, “Ted” brought in $218 million in the U.S. to rank No. 9 and brought in nearly $550 million worldwide.

But of the list of all-time highest-grossing movies, the highest-ranking R-rated film is “The Matrix Reloaded,” which brought $742 million in 2003 — at No. 54.