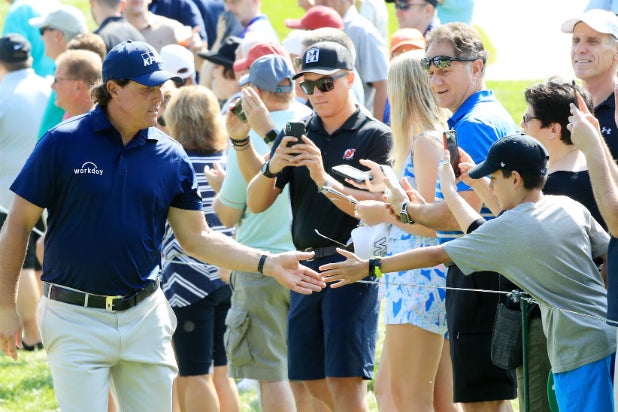 The Northern Trust, which is the official start to the PGA Tour’s FedEx Cup Playoffs, teed off at New Jersey’s Ridgewood Country Club on Thursday.

TheWrap showed up the following day with some excellent access, and this orange-capped speck in Tiger Woods’ massive gallery has some stuff to tell you about.

Read all about our day below.

Open Bar, Dude
Being the “influencers” that we are, this 26 (or so) handicapper had access to Michelob’s Ultra Lounge, which was perched on the 15th green. Though the air-conditioned tent — which began construction about six months ago — included two open bars, the bars were not actually open until 11 a.m.

You probably know where this is headed. Smash Cut To: A bunch of people rich enough to afford $450-a-pop tickets creeping closer to the inclusive bar as each minute from 10:45 passed. When the clock finally struck 11, the Bloody Marys flowed like (Grey Goose) vodka.

The Corn. My God, the Corn
As much as everyone enjoyed the bar, we’re here to tell you that the catering highlight was corn on the cob. The farm fresh Jersey Corn was doused in butter and topped with cheese. We didn’t even mind the cilantro, which should be considered the devil’s herb.

Sorry, Webb Simpson
This reporter badly violated golf etiquette as poor Webb Simpson, Francesco Molinari and Bryson DeChambeau tried to tee off at 1:17 p.m. Returning from our behind-the-scenes tour, which included stops at the media tent and Massage Envy trailers, our bearings were a bit messed up. Apparently we emerged from the area off-limits to the public right at the first tee exactly as the group was set to start their workday.

Sorry for that loud laugh and clapping response to the PGA rep’s story during your backswing, boys — hope you all ended up in the fairway.

YOU Get a BMW, YOU Get a BMW — EVERYONE GETS A BMW!
As one of the main sponsors for The Northern Trust, which will rotate between Jersey City and Boston going forward, BMW provides cars this week for each golfer. We toured the players-only parking lot, which looked like a Bimmer (that’s the correct term, Google it) dealership lot.

Could be worse — could be a Smart Car sponsored event.

Speaking of Which, Just Wait for the 2020 Models
This part was opened to any attendee — as long as you were willing to turn in your cell phone and smartwatch, that is.

BMW set up a (beautifully air-conditioned) hut with two new models that are set to debut next year. There was an 835i convertible and the German manufacturer’s first-ever three-row SUV, the X7. Both are expected to list for around $125,000, which is a bit out of our price range, but should be no problem for those Ultra Club attendees.

Lovemark Is Atop the Topgolf Leaderboard Too
At the time of this writing, American Jamie Lovemark (-10) is tied with fellow stateside-golfer Brooks Koepka atop the leaderboard. There’s a tiebreaker though — and we’re not talking about a Sunday night playoff should the two stay neck-and-neck.

Mastercard had a killer setup at the tourney, which was open to any cardholder. Not only was there a cool tent with the biggest-screen TV we saw on Friday, it led out to a Topgolf setup. Topgolf is kind of like the driving range mixed with darts mixed with blacklight bowling mixed with video games mixed with something else cool. You aim at targets and everything is microchipped, awarding points for landing spots — read more about it here.

Anyway, Mastercard and the PGA had players stop buy and hit five balls at the targets, setting up leaderboards for the pros and everyday wannabes. Lovemark, who is clearly on his game this week, was at the very top. Let’s just say this amateur didn’t quite crack the Top 10.

Why some dude who shot a 77 (which is not good) and missed the cut yesterday? Well, a lucky few of us caught the world’s No. 54-ranked golfer snapping a wedge over his knee before walking up to the 14th green. Oh, we’ve been there buddy — a number of times.

By the way, he parred the friggin’ hole.

Round 3 of The Northern Trust is underway from the Paramus-based private club. The tournament airs on CBS, with early action on the Golf Channel.