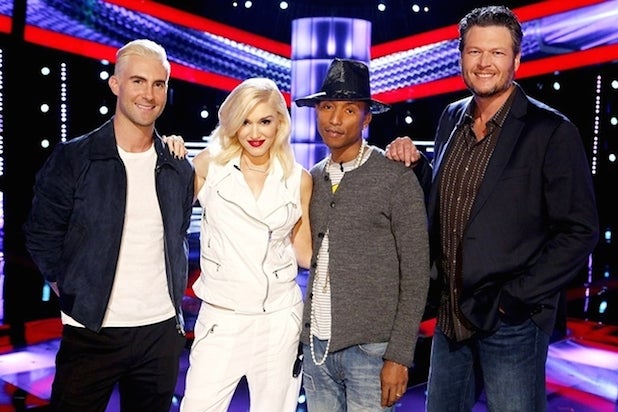 The mentors for Season 8 of NBC’s “The Voice” have been set, and the panel will include the return of Pharrell Williams for a second straight season. The seat occupied by this season’s first-time judge Gwen Stefani will be filled by returning original judge Christina Aguilera, a move previously announced.

“Voice” host Carson Daly broke the surprise news Tuesday during “Today” show that Pharrell would be back so sooner, instead of Usher, who’s served as a judge for Seasons 4 and 6.

Blake Shelton and Adam Levine will also be returning. The two mentors are the only ones who haven’t missed a single cycle of the show since its debut in spring 2011.

“We are excited to welcome Christina back to her red chair and can’t wait to see how she mixes things up among Adam, Blake and Pharrell, in what will be an incredibly competitive competition” said Paul Telegdy, NBC’s President of Alternative and Late Night Programming, said in statement to TheWrap. “These four talented artists are at the top of their game as musicians and as coaches. The mentoring is sure to be intense and the stakes will be high.”

Back in February, original judge CeeLo Green announced that he wouldn’t be returning to the show, in light of legal problems stemming from accusations that he slipped a woman the drug ecstasy.

Although CeeLo announced the news himself unexpectedly during a visit to Ellen DeGeneres‘ talk show, a source close to TheWrap said then that he it was a preemptive move to avoid being fired.

No premiere date has been set yet for the show’s next cycle.

“The Voice” certainly has been doing well with its rotating judge formula. It opened the new fall television season as the #1 reality show in primetime and the #2 overall entertainment show on any of the four main networks.