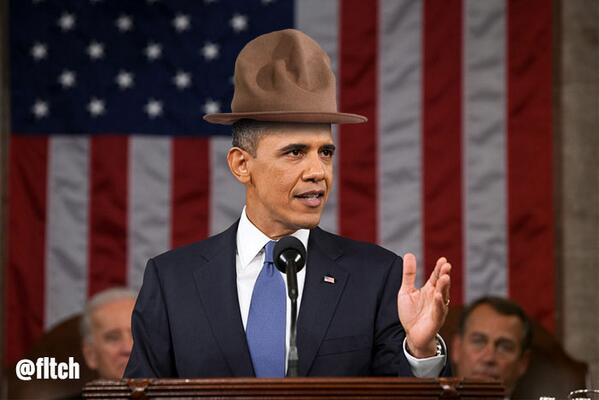 Pharrell Williams may be in contention for an Oscar for Best Original Song, and he may have been a collaborator on the Album of the Year, but what he’s probably best known for right now is that crumpled brown hat he wore to the Grammys.

The singer’s hat was a brighter new star than Lorde. It has more than 18,000 followers on Twitter. And it’s even graced the head of the President of the United States of America… kind of.

The internet knows a meme when it sees one. But when Pharrell contacted his haberdasher that fateful Sunday morning, all he saw was a piece of fashion history.

“He had a song called ‘Buffalo Stance’ and when I was a kid it was a big thing, so I was with a friend of mine … and she gave me the history when we went to the Vivienne Westwood store and I was like ‘Okay, I need that.'”

That attribution is a little off, though. Malcolm McLaren and the World’s Famous Supreme Team recorded a song in 1982 called “Buffalo Girls,” a hip-hop play off the old standard “Buffalo Gals” (see, “It’s A Wonderful Life”). The hats appear in the music video for that song. McLaren’s song was later sampled for Swedish singer Neneh Cherry’s 1988 song “Buffalo Stance,” which Pharrell references.

Anyway, Pharrell said he’s had the hat for four or five years and decided to throw on his Adidas jacket and buffalo hat “at the very last minute.” And so a viral hit was born.

He certainly wasn’t expecting all of the buzz after the hat’s Grammy debut.

“Can I tell you? I was surprised!” he said on Seacrest’s show. “I was like, ‘What? Like, what do you mean?’ You know, So many people were dressed amazing.”

The hat has been compared to Smokey the Bear’s hat and the Arby’s logo. It’s been turned into the Sorting Hat from “Harry Potter.” But it finally got its big break when it trudged through the ice and snow to sit atop the head of President Obama at Tuesday’s State of the Union address… courtesy of Photoshop, of course.