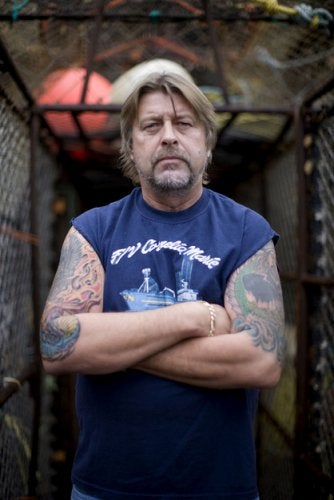 Phil Harris, the crab fisherman whose chain-smoking, gruff-talking ways made him a fan favorite on "Deadliest Catch," has died at age 53 after suffering a stroke late last month.

"It is with great sadness that we say goodbye to our dad, Captain Phil Harris," Harris' sons Jake and Josh said in a statement released by Discovery Channel, which airs the show. "Dad has always been a fighter and continued to be until the end. For us and the crew, he was someone who never backed down. We will remember and celebrate that strength."

Harris was found unconscious in a stateroom during an offloard of crab. After being airlifted to an Anchorage hospital, he was eventually put in a medically induced coma after undergoing 12 hours of surgery.

Harris, who began fishing when he was just 7 years old and started captaining his own boat at 21, refused to give up the captain's chair of his ship, the Cornelia Marie, even after his doctors advised him to for the sake of his health.

Discovery Channel's "Deadliest Catch" follows fishing crews, such as the one led by Harris, as they brave the dangerous waters along the Bering Sea in search of fish.

On the show, Harris was known for his love of practical jokes and for his tendency to wax poetic about his enduring relationship with the sea.

"Discovery mourns the loss of dear friend and colleague Captain Phil Harris. He was more than someone on our television screen. Phil was a devoted father and loyal friend to all who knew him. We will miss his straightforward honesty, wicked sense of humor and enormous heart. We share our tremendous sadness over this loss with the millions of viewers who followed Phil's every move. We send our thoughts and prayers to Phil's sons Josh and Jake and the Cornelia Marie crew."