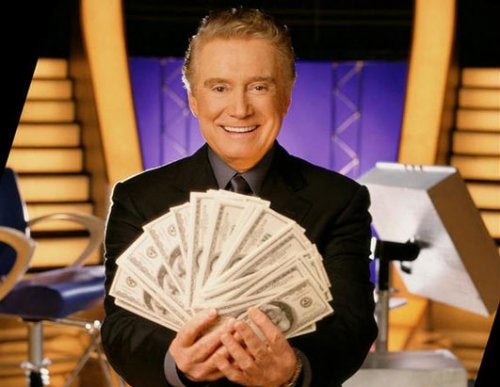 More than five years after ABC essentially ran the primetime version of "Who Wants To Be A Millionaire" into the ground through over-programming, original star Regis Philbin will return to the host’s chair. Philbin will fill in for regular "Millionaire" host Meredith Vieira for a week-long stint as celebrity guest host, from Nov. 30 to Dec. 4.

If you curious how Philbin will fit in his guest hosting duties when he supposed to be taking the rest of the year off from "LIVE! with Regis and Kelly" to recuperate from hip surgery, the answer is simple. The appearance was taped earlier this month.

Michael Gelman, executive producer of "Live! With Regis and Kelly," will be the expert for the “Ask the Expert” lifeline during Philbin’s episodes. Gelman appeared via Skype from his "Live" office, offering contestants help in his areas of strength: history, pop culture, science, geography and food. He cited his weaknesses as literature and sports.

It marks the first time that the popular television personality has appeared as a guest host on the weekday version of the show, though this past August, Philbin celebrated the tenth anniversary of the U.S. version of the  "Millionaire" franchise by reviving the primetime version of the show for a special 11-episode run.

The weekday version, which debuted in 2002 with Vieira as host, is is in its eighth season.