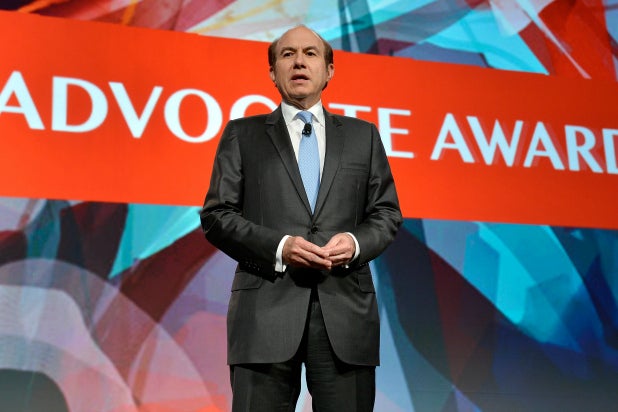 Viacom CEO Philippe Dauman may be hanging on to his job by a thread — but it’s a strong one, he says.

The man feuding with former mentor Sumner Redstone recently told Fortune magazine that he deserves to keep his high-profile (and high paying) job because he’s “realigned this company for the future.”

Also Read: Here Are 11 Questions a Judge Has on the Dauman-Redstone Drama

During the interview, Dauman wouldn’t predict the end result of the nasty ongoing legal fight with Redstone.

“We will find out,” he said. “I hope it doesn’t take long, because it puts a lot of stress on the organization.”

Fortune editor Alan Murray then pushed the possible hypocrisy angle: “You met with Redstone in November and testified he had his wits about him,” the journalist posed.

“The issue at hand there was about his health care, and as I said, he was attentive and engaged,” Dauman replied. “But this context is totally different. We weren’t addressing significant business decisions.”

When asked what people are missing in all of the public mudslinging, Dauman replied, “The press loves drama. People are missing the business story. This is a great place to work. We have great values. Creativity is at the center of it. We want to do good while we do well. We attract great millennial talent.

“We talked about data … we’ve attracted data scientists who could easily get jobs at the biggest tech companies around,” he continued. “Why? Because it’s a fun environment to be in.

“We have a great organization, and we hope we don’t lose too much of that during all this,” Dauman concluded. “This will pass, and the company will endure.”

But will Dauman endure? Redstone moved to yank his ex-protege and four others from the Viacom Board of Directors last week. The courts are still out to determine if the National Amusements, Inc. founder has the mental capacity to make such a crucial business move.