The best thing about the new “Phish 3D” film was actually Kenny Chesney.

More on that in a bit.

Everything else about the advanced “Phish 3D” screening they staged Tuesday night at The Bridge – and in several U.S. cities on this hallowed 4/20 – was excruciating.

That is to say I experienced actual physical pain, and considerable mental anguish, while watching it.

Forty minutes in, I left the theater.

Just so we’re clear as I get going here, I love Phish. I was 10 or 11 rows deep on Trey’s side when they ushered in the millennium at Big Cypress. I covered their reunion and interviewed them last year. I thought their last album, "Joy," was first rate.

The music was not the problem. Shot last October on the Coachella grounds out in Indio, the performance from the three-night run they dubbed Phish Festival 8 is above average. Like with all Phish shows, they have their moments, and you take the good with the bad.

The problem was Don Wilson.

You may remember Wilson — who takes the sole filmmaking credit on imdb, as “Editor" — from such films as "Ozzy Osbourne: Wicked Videos" and "Playboy: Fast Women."

Because “Wicked Fast” Wilson couldn’t keep his itchy finger off the switches in the editing room, the camera jumps around so often – a different angle and distance about every 1.5 seconds or less – that your eyes never have enough time to adjust to the changing depths. Even movie rubes like me know you don’t fill a shoestring 3D movie with quick cuts; it throws the eyes into violent oscillations of depth-perception. And it sucks.

At best, the cheesy, timed-with-the-music cuts start to jangle your nerves. At worst, you start to get a near-audible “thunk” in the back of your eyeballs with every jump.

And then you tear off your glasses and exit the theater, wishing you could punch Wilson in the eye.

Oh, Wilson. Even in 2D, this edit would’ve been annoying – you can never once explore the oversized scene; or focus on what one musician is doing during an intricate passage; or scan for faces in the crowd you may know. Maybe even yours.

I must inquire, Wilson: If they make a Razzies category for Most Unwatchably Crapulent 3D Experience, will you still have fun meeting Sandra Bullock? 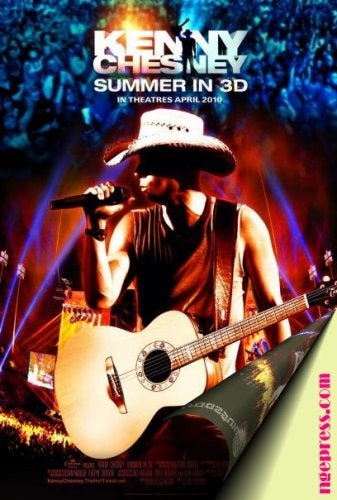 Here’s a Hail-Mary plea to the folks who put money behind this movie: I have no doubt you are lovely, thoughtful people. It’s an affront to my DNA to hate on this movie. But I beg of you: Rip the footage out of Wilson’s hands and get a new edit going; one where you can take a moment to marvel at Chris Kuroda’s stupendous lighting designs, or gape at the giant balloon-blob thingy that’s floating over the crowd.

Your wide release date is April 30. If you start right now, there’s enough time to change it.

One thing that needs to stay exactly the same, though: The Kenney Chesney “Ultimate Concert Experience” trailer you played before the movie began. Oh my lord, that brought the house down with peals of hyena laughter.

Bravo for that move. That was comedy gold.