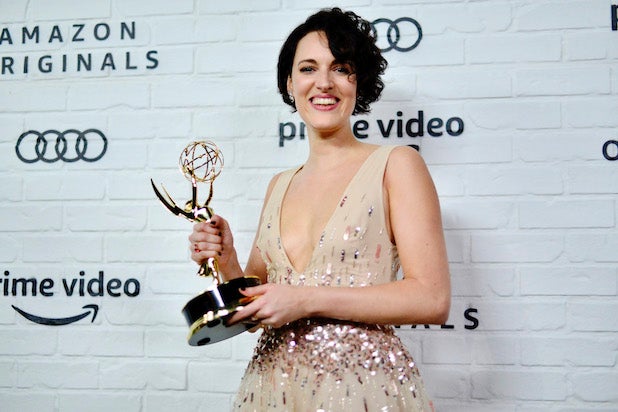 Phoebe Waller-Bridge has signed an overall deal with Amazon, the studio announced Tuesday.

Under the pact, Waller-Bridge will create and produce new television content for Amazon Studios that will stream exclusively on Amazon’s Prime Video. Terms of the deal were not disclosed.

Apart from “Fleabag,” which debuted as Waller-Bridge’s one-woman show at the Edinburgh Festival Fringe in 2013, Waller-Bridge is best known for creating BBC America’s “Killing Eve,” starring Jodie Comer and Sandra Oh, and serving as writer and showrunner on the drama’s first season. She is currently co-writing the script for the 25th James Bond movie, “No Time to Die,” starring Daniel Craig.

“I’m insanely excited to be continuing my relationship with Amazon,” Waller-Bridge said in a statement. “Working with the team on ‘Fleabag’ was the creative partnership dreams are made of. It really feels like home. I can’t wait to get going!”

“We are thrilled to be continuing our partnership with Phoebe at Amazon Studios! As evident in her great success at the Emmy Awards this week, she is clever, brilliant, generous and a virtuoso on multiple fronts including writing, acting and producing,” Amazon Studios chief Jennifer Salke said. “‘Fleabag’ has been a gift to our Prime Video customers and we are excited for what comes next from this brilliant mind to dazzle and delight our global audience.”

In case you are one of the few people who isn’t already obsessed with Waller-Bridge, here’s her bio, courtesy of Amazon:

Waller-Bridge is a multi-award-winning creative, garnering praise for her work as an actor, writer, creator and showrunner. Before being adapted into the acclaimed television series, Fleabag first debuted as a one-woman show at the Edinburgh Festival Fringe in 2013, which Waller-Bridge wrote and performed. This earned her an Olivier Award Nomination and a Critics’ Circle Theatre Award for Most Promising Playwright, among other accolades. Waller-Bridge recently concluded limited, sold-out runs of her one-woman show Off-Broadway at New York’s SoHo Playhouse in April, and at London’s Wyndham’s Theatre in the West End earlier this month. The extended, sold-out New York run earned her a Drama League Award nomination for Distinguished Performance, a Lucille Lortel Award nomination for Outstanding Solo Show and a Drama Desk Award nomination for Outstanding Solo Performance.

Waller-Bridge has also garnered acclaim as the writer and showrunner of the first season of the celebrated BBC America television series ‘Killing Eve,’ which stars Sandra Oh and Jodie Comer. The series earned Waller-Bridge a Golden Globe Award nomination for Best Drama Series, as well as an Emmy Award nomination for Outstanding Writing of a Drama Series. The first season won a Peabody Award in the Entertainment category, and was also nominated for 15 BAFTA Television Awards, including Best Drama and Best Writer: Drama.

On film, Waller-Bridge appeared as the first female droid in Ron Howard’s ‘Solo: A Star Wars Story.’ It was also recently announced that Waller-Bridge had joined the writing team for the 25th James Bond film ‘No Time to Die,’ starring Daniel Craig and directed by Cary Fukunaga. The film is dated for an April 2020 release.

Waller-Bridge is also Co-Artistic Director of DryWrite Theatre Company, an award-winning and Olivier nominated new-writing theatre company that challenges writers to work with specific briefs and goals to actively engage audiences. She is also a graduate of the Royal Academy of Dramatic Arts.

She is repped by UTA, Hatton McEwan Penford, Independent Talent and Ziffren Law.