Piers Morgan is criticizing Meghan Markle — again. This week, the former “Good Morning Britain” host is taking aim at the Duchess of Sussex’s upcoming children’s book, inspired by the relationship between Meghan, her husband Prince Harry and son Archie. According to Morgan, Markle’s book is now on “the current shortlist for the title of World’s Most Ludicrously Inappropriate Book.”

Featuring art by Christian Robinson, “The Bench” is set to depict different father-son relationships, “between fathers and sons from all walks of life.” According to Markle, the book was inspired by a poem she wrote to Prince Harry on Father’s Day in 2018.

In a DailyMail column on Tuesday, Piers Morgan tore the idea to shreds, saying “I laughed out loud when the news broke via her ecstatic publishers, and even louder when I read the accompanying gush-laden statements.” 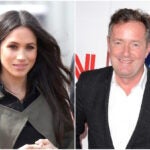 For Morgan, the book is another act of “gargantuan hypocrisy” from the Duchess of Sussex, who is estranged from her own father. “Lest we forget, Ms Markle has ruthlessly disowned her father Thomas and refuses to have anything to do with him despite the fact they now live just 70 miles from each other,” Morgan wrote.

Morgan also doubled down on his comments calling Markle a liar again, criticizing her and Prince Harry for having put distance between their own family and the royals.

“The pair of them also branded Harry’s royal family a bunch of heartless racists, though no evidence has yet emerged to support any of their outrageously hurtful and damaging claims,” Morgan wrote.

Following the release of Morgan’s column, the host himself was blasted for his latest scathing attack on Markle’s character. “I’m not being funny… Meghan Markle needs a restraining order against piers Morgan… this is beyond me,” wrote Rachel Chinouriri.

Jameela Jamil, who played Tahani Al-Jamil on NBC’s “The Good Place,” also spoke up against Piers Morgan, poking fun at how often he attacks Markle with a GIF from “The Wolf of Wall Street.”

You can read more opinions of Morgan’s attacks below.