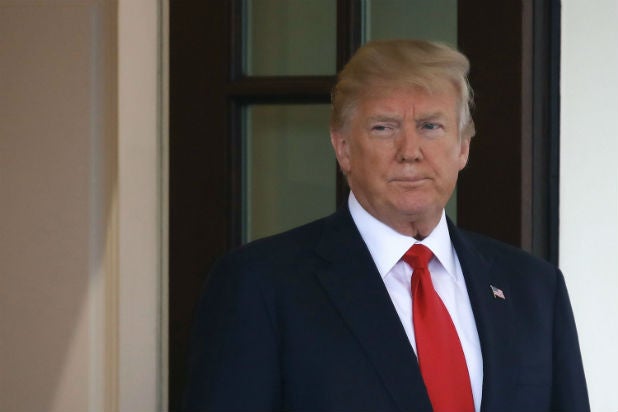 Piers Morgan came at President Trump with both barrels Monday morning, accusing Trump of rolling over for the National Rifle Association in the ongoing debate over gun control.

A Daily Mail column by British media personality Morgan published Monday took aim at Trump with the headline, “You claimed you’d take on a school shooter with your bare hands Mr President, but your gutless surrender to the NRA proves you’re no braver than the school guard you branded a disgusting coward.”

In his column, Morgan tore into Trump for entertaining the idea of arming school teachers and seeming to abandon raising the minimum age for gun purchases.

“The White House has announced there will be NO increase in the minimum age to purchase guns, from 18-21 – as Trump had said he wanted,” Morgan wrote. “So unhinged kids like the Florida school shooter will still be prohibited from buying a beer until they are 21 but are free to carry on arming themselves like Rambo from the age of 18.”

Morgan went on to call the idea of arming teachers “insane,” writing, “So thousands of people whose job it is to educate children will now be trained to fire guns in schools, and be equipped with guns to fire … Of course, this means thousands of new gun sales, which means thousands of new dollars to America’s gun manufacturers, who will then use a chunk of that money to donate to the lobby group that fights for its rights.”

Trump added, “On 18 to 21 Age Limits, watching court cases and rulings before acting. States are making this decision. Things are moving rapidly on this, but not much political support (to put it mildly).”

In his column Monday, Morgan wrote that he felt a “cold, shuddering feeling of sickening betrayal.”

“After three of America’s worst ever mass shootings happened on his watch, President Trump promised to take on the NRA,” Morgan wrote.

After a series of encouraging moves on the president’s part, Morgan wrote, “Trump’s just rolled over like the worst kind of weak, spineless stooge and caved to pressure from NRA President Wayne LaPierre and his vile leadership cohorts.”

Morgan accused Trump of caving to the NRA “in such a pitiful way” because of the midterm elections later this year.

“In their meeting, LaPierre will have threatened Trump that if he proceeded with any proposals that restrict the sale of firearms, then the NRA would go to electoral war,” Morgan wrote. “A president as strong as Trump claims to be would have told the NRA to go f— itself at being bullied in this manner … But instead, for all his bullish rhetoric, he promptly threw in the towel.”

Morgan concluded, “Today, we discovered just how fearless Trump is prepared to be when it comes to the NRA … And the answer is about as fearless as that security guard he branded a disgusting coward.

….On 18 to 21 Age Limits, watching court cases and rulings before acting. States are making this decision. Things are moving rapidly on this, but not much political support (to put it mildly).