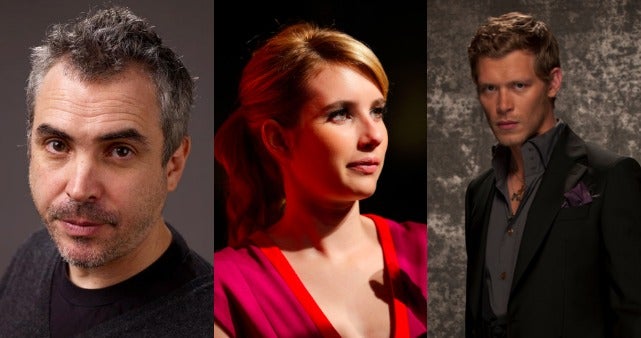 Welcome to Part 2 of our very early attempt to predict which broadcast pilots will become full-fledged shows next season. For Fox pilots, the struggle to get on the air just got a little harder.

Fox announced early renewals Monday for four of its shows  — "The Following," "New Girl," "The Mindy Project" and "Raising Hope." The renewal of "New Girl" is no surprise — it's done well since its debut last season.

But Fox didn't need to make a quick commitment to the other three shows, given their unremarkable ratings. Its decision to renew them now suggests the network is giving its existing series time to grow, rather than scrapping them for something new.

That's good for the shows, but bad for the pilots eager to replace them. Still, Fox has at least two shows that look to us like solid bets for next season. NBC, meanwhile, has three, and the CW has two.

How are we making our predictions about what series will get the greenlight for 2013-14? We're going based on the talent and creators involved, each network's needs, and, honestly, what we think looks cool.

Check out our list of every broadcast network pilot to see if there are any shows you think we missed. Until then, here's our network-by-network list of what we consider the best prospects for next season. (Click on logos for each network's individual pilot grid.)

Fox has had better luck with comedies than dramas lately. High-profile dramas like "Terra Nova" and "Alcatraz" failed, and "Touch" looks to be in danger despite the presence of "24" vet Kiefer Sutherland.

Continuing the trend, Fox's lineup of comedy pilots looks a little stronger than its drama lineup.

We consider these the Fox pilots with the most potential: The case for: A great concept and strong lead. NBC's hit "Revolution" imagines a world without energy. "Delirium," based on a bestselling trilogy, imagines a future that is short on another resource: love. A special procedure can eradicate life's mushiness. But 95 days before her scheduled treatment, Lena Holoway (Emma Roberts), feels butterflies.

The case against: Fox's recent forays into sci-fi-like fare have gone badly. But this one sounds a little more relatable.

"TO MY FUTURE ASSISTANT"

The case for: The older cast, including Catherine O'Hara and Stephen Root. This is one of four pilots this season involving difficult bosses. (With "The Office" departing, we guess there's an opening.) This one stars Brittany Snow as one of several assistants who try to cope with the crazy people at the top. Writers Sherry Bilsing and Ellen Plummer worked on "Friends," which everyone except for your humble correspondent just loves.

The case against: It's inspired by a blog. We know executives love to sign off on things inspired by thrilling new mediums like Twitter feeds or Instagrams of milk bottles or Vines of sleeping pugs, but what works in one medium doesn't always work in another.

We can never count out J.J. Abrams and Bryan Burk. The "Lost" and "Revolution" producers are executive producing a pilot by J.H. Wyman about a near future where LAPD officers are paired with androids. (Not parking enforcement people — actual androids.) Lili Taylor was just cast.

We have higher hopes for "Gang Related," about a gangster who joins the San Francisco police department and finds his loyalty split between his gang and his new law enforcement family. It has an intriguing cast that includes Jay Hernandez, Ray Rodriguez and The Rza (right). But the premise may be too gritty for primetime.

"Friends and Family" would mark the television return of "Gilmore Girls" national treasure Alexis Biedel, fresh from a stint on "Mad Men." In this adaptation of the British series "Gavin & Stacey," she and Jason Ritter play a couple whose relationship is constantly disrupted by their friends and family.

"The Gabriels," about a family that despises all things normal, deserves some attention because of reliably funny stars Rob Riggle and Tim Meadows. And we're curious about whether Andy Samberg can be as funny in Dan Goor and Mike Schur's comedy about a New York police station as he was on "Saturday Night Live."

Fox is also admirably going outside the traditional drama/comedy development cycle with new limited-run event series, "Wayward Pines" and "Blood Brothers." That enables it to take some big swings over a set number of episodes without having to commit to a whole series. And, of course, they can always turn one of their limited runs into a series if it hits.

NBC got off to a big start this fall thanks to "The Voice" and "Revolution," then slid hard when both went on break for the winter. Signature comedy "30 Rock" is gone,  and "The Office" will soon follow. Its attempt at broader comedy hasn't worked: Even its most successful new sitcoms get only passable ratings.

The network needs to take some big risks, like it did with "Cheers," "Seinfeld" and "The Office."

The good news is, it has two shows with at least some built-in audience: "Hannibal," debuting this season, and a Michael J. Fox sitcom scheduled for later this year.

It also has 26 pilots to choose from – more than any other network. We think these are its strongest contenders: The case for: Abrams and Bryan Burk, at it again. And co-writer Alfonso Cuaron wrote and directed "Children of Men" and directed "Harry Potter and the Prisoner of Azkaban." They have just the right pedigree for this series about a young girl with a gift and a man sprung from prison, intent on protecting her. The just-announced casting of "Twin Peaks" veteran Kyle MacLachlan only adds to our hopes for the series. Also in its favor: Shows with supernatural elements – from "Grimm" to "Once Upon a Time" to "The Walking Dead" – are more popular than ever.

The case against: Can another genre series with a one-word title and mysterious concept stand out from "Grimm," "Revolution," and the rest of the pack?

The case for: Charlize Theron, who makes good choices, is among the producers of this update on the family feud, relocated to modern-day Pittsburgh. Last year's separate adaptation of the story, starring Kevin Costner and Bill Paxton, was a hit for History. Virginia Madsen and Rebecca DeMornay are among the leads.

The case against: What does this have to do with the old West Virginia feud, exactly, aside from the names of the characters? Setting it in a modern city — albeit an underrated, very photogenic one — robs the story of its backwoods-adventure element.

The case for: Why are we highlighting a pilot from a comedian you may not have heard of instead of new shows starring "Office" veterans Ellie Kemper and Craig Robinson?  Because Mulaney — we don't say this lightly — has a Seinfeldish quality. The former "Saturday Night Live" writer delivers the same smart, observational style of humor, but can also go very weird, in keeping with great NBC comedies like "30 Rock." (On "SNL," he wrote Bill Hader's Stefon routines.) With "30 Rock" gone and "Up All Night" likely over, executive producer Lorne Michaels will be able to pay close attention to the show. Along with that other show he does on the weekends.

The case against: You still don't know who John Mulaney is. But he's funny, we promise. Here:

We'd watch Craig Robinson as a musician-turned music teacher in Owen Ellickson's unnamed pilot. And we'd check out Kemper's turn in "Brenda Forever," which follows a chubby, awkward and confident 13-year-old's transition into a 31-year-old. It's written by David Lampson and Andrew Leeds, with "Rescue Me" co-creator Peter Tolan producing.

We think these are the CW's best bets:

The case for: "The Vampire Diaries" has been the biggest hit for the struggling network, and this spinoff from co-creator Julie Plec ( ), about the show's old-school vampires, is a very safe pick. It will air as a backdoor pilot on "The Vampire Diaries" this spring.

The case against: It may be too safe a pick. But the CW could use a sure thing or two.

The case for: The CW passed last season on this book adaption about a young girl in a dystopian future who must compete for the hand of a handsome prince. Think "The Hunger Games" crossed with "The Bachelor." But the network thought enough of it to keep it in development and try again.

The case against: Former lead Aimee Teagarden has departed for another CW pilot, "Oxygen." And the prince has been recast. We liked Teagarden on "Friday Night Lights" and hope her exit is a vote of no-confidence.

"Tomorrow People" comes from "Arrow" co-creator Greg Berlanti and the "Vampire Diaries" co-creator Julie Plec. The CW is loyal to its showrunners, which might give the show a shot despite a premise that will sound very familiar to fans of "The X-Men": Young people who represent the next stage in human revolution band together to fight evil with powers including teleportation and telepathy.