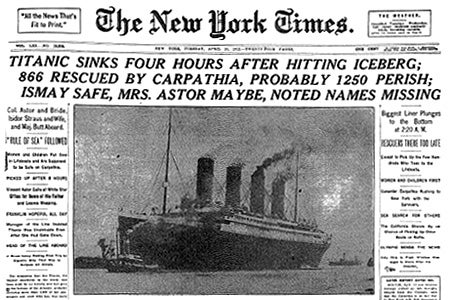 This is a little unreal.

Yuan asked Sulz what advice he had for aspiring young journalists? "Why don’t we not go there?" Sulzberger said. Then he proceeded to go there:

"Um, what I would tell them is the industry is in the midst of a massive transition. But the core of the fundamental job is critical. We have to re-create ourselves, but the heart of what we’re going to re-create is still journalism. The way people get information is changing, but the need for information will remain constant."

"The best analogy I can think of is — have you ever heard of the Titanic Fallacy? What was the critical flaw to the Titanic? A captain trying to set a world speed record through an iceberg field? Even if the Titanic came in safely to New York Harbor, it was still doomed. Twelve years earlier, two brothers invented the airplane."

I think I get his point – there are new technologies changing the face of journalism, but the core remains the same, etc., etc. — but, come on man! Your paper just announced that it needs to cut 100 positions, or about 8 percent, from its newsroom by the end of the year – and that on top of the 5 percent pay cut you already instituted! This isn’t the time to be comparing your business to a ship that sank and killed 1,517 people! That’s the “best analogy” you can think of?!