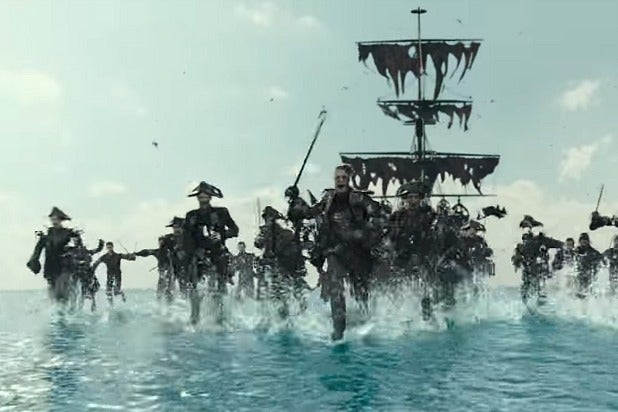 Three weeks away from its Memorial Day weekend opening, Disney’s “Pirates of the Caribbean: Dead Men Tell No Tales,” is being pegged by independent trackers for a $90-100 million four-day opening.

An opening in that range would be consistent with the $90 million opening made by the Johnny Depp film’s 2011 predecessor, “On Stranger’s Tides”, but that total would be below the franchise-high $135 million three-day opening made in 2006 by “Dead Man’s Chest” and the $139 million four-day opening made on Memorial Day weekend in 2007 by “At World’s End.”

And yet, “Pirates 5” still has a solid chance to gross $1 billion worldwide if it can continue the franchise’s trend of steadily increasing overseas numbers. The first “Pirates” film, “The Curse of the Black Pearl,” made 53 percent of its $654.2 million global cume from overseas markets in 2003. Since then, the overseas share has steadily increased, with 60 percent for “Dead Man’s Chest” ($1.06 billion global cume), 68 percent for “At World’s End” ($963 million) and 77 percent for “On Stranger’s Tides” ($1.04 billion). The fourth “Pirates” film, which starred Penelope Cruz and Ian McShane alongside Depp, made $804 million internationally, including $108 million from Japan.

“Pirates” isn’t the only film franchise making a billion largely off of international markets. This past weekend, Universal’s “The Fate of the Furious” blazed past the $1 billion global milestone with a whopping 82 percent of its $1.1 billion global total coming from overseas. By comparison, “Fast Five” had an overseas share of 66.5 percent, with a 70 percent share for “Fast & Furious 6” and a 76 percent share for “Furious 7.”

The “Transformers” franchise has also seen a spike in this category, with a 68 percent share for its third installment “Dark of the Moon” jumping up to nearly 78 percent for its $1.1 billion-grossing fourth installment “Age of Extinction.” The fifth “Transformers” film, “The Last Knight,” will be released by Paramount in July.

“The international territories will be key to the success of ‘Dead Men Tell No Tales,’ said comScore’s Paul Dergarabedian.  “and much like “Furious 8,” this is where the lion’s share of the box office booty will come from.”

Regardless, a $90M+ opening will likely allow “Pirates” to double up the total projected by its main box office competitor, “Baywatch,” which is projected for a $35-40 million opening. Loosely based on the hit TV series about a team of lifeguards, “Baywatch” stars Dwayne Johnson, Zac Efron, Priyanka Chopra, Alexandra Daddario and Kelly Rohrbach. Seth Gordon (“The King of Kong”; “Pixels) will direct the film.

“Pirates of the Caribbean: Dead Men Tell No Tales” will see the return of Orlando Bloom and Keira Knightley to the franchise, having last played Will and Elizabeth Turner in “At World’s End” ten years ago. Depp, Geoffrey Rush, Kevin McNally, and Javier Bardem also star in the film, with indie filmmakers Joachim Ronning and Espen Sandberg on to direct in their first Hollywood project. Jerry Bruckheimer returns to produce.