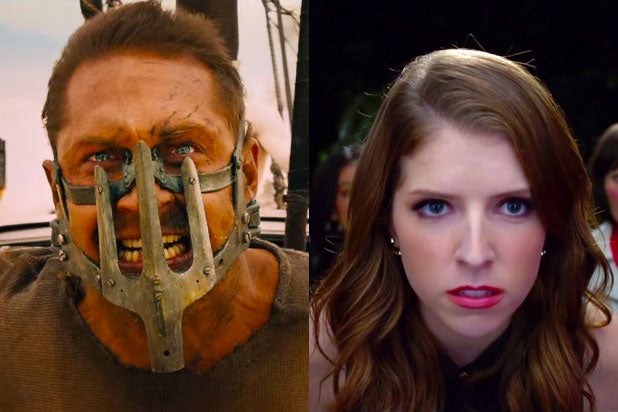 “Pitch Perfect 2,” a PG-13 comedy musical movie about an all-girls a cappella singing team, on Friday belted out a spectacular $27.8 million at the box office in its first day in release for Universal Pictures.

With Rebel Wilson as Amy and Anna Kendrick playing Beca, the Barden Bellas are heading for a stunning $64 million No. 1 opening weekend that will end the two-week reign of “Avengers: Age of Ultron” and make a blowout of its battle of the sexes with “Mad Max: Fury Road.”

Disney’s Marvel superhero sequel “Age of Ultron” will finish third at around $37 million in its third weekend, after taking in $10 million from a market-high 4,276 theaters on Friday, the same day it crossed $1 billion at the worldwide box office.

The $27 million first-day haul for “Pitch Perfect 2,”directed by Elizabeth Banks and written by Kay Cannon, is a very high note, roughly $20 million beyond the projection of analysts and the studio. A little under its $29 million production budget, Friday’s take from 3,473 theaters is $7 million more than the $21.6 million that the original “Pitch Perfect” made in its first two weeks of release in 2012.

Hailee Steinfeld and Katey Sagal joined the ensemble cast of “Pitch Perfect 2,” which returns Skylar Astin, Brittany Show, Anna Camp and Adam DeVine from the original. The reviews have been good (69 percent positive on Rotten Tomatoes) and on Friday its predominantly female fans brought the biggest shot of girl power seen at the box office since “Fifty Shades of Grey” and “Frozen.” They gave it an “A-” CinemaScore.

“Fury Road,” which co-stars Charlize Theron, is a hit with critics, and is at a sterling 99 percent positive on Rotten Tomatoes. Audiences weren’t quite as impressed and gave it a “B+” CinemaScore.

Despite the pyrotechnics supplied by the top three films, the overall domestic box office was running just under the comparable frame last year, when “Godzilla” exploded for $93 million to top the second week for “Neighbors” and “The Amazing Spider-Man 2” in its third week.

The profitability bar is higher for the “Mad Max” sequel because of its considerable production budget of at least $150 million. The action epic more than doubled the $7.2 million first-weekend take of the previous movie, but that was in 1985 and unadjusted for inflation.

A major score overseas is imperative for “Mad Max,”  which is opening in 68 foreign markets this weekend, all of the major nations except for Japan and China, where it has yet to confirm a release date.

It launched in 20 additional markets on Friday, including the UK, Spain, and Mexico, grossing a strong $14.2 million to lift the two-day overseas total to $24.6 million.

The plot of “Pitch Perfect 2” has the girls vying with foreign teams in an international competition and that may have helped it connect in its opening weekend abroad. Performers from the U.K, Germany and the Philippines are featured, and “Pitch Perfect 2” opened at No. 1 in all three of those countries.

The U.K. debut of $2.5 million was the fourth largest of the year, behind “Furious 7,” “Avengers: Age of Ultron” and “Fifty Shades of Grey.” The $2.4 million it scored in Germany was nearly three times bigger than the debut of the original. And in Philippines it took in $1 million from just 135 locations.

Even in Australia, where “Mad Max: Fury Road” and the original film were shot, the Barden Bellas were overachieving.“Mad Max” opened at No. 1 on Thursday, but “Pitch Perfect 2” took back the top spot on Friday.