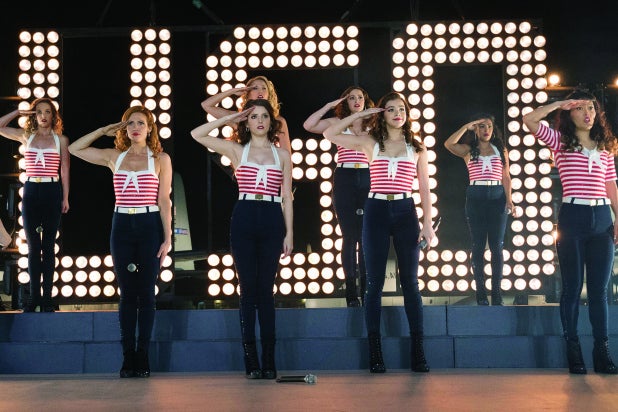 A busy Christmas weekend kicked off on Thursday evening as Universal/Gold Circle’s “Pitch Perfect 3” entered theaters and made $2.1 million from preview screenings.

By comparison, the previous installment in the comedy-musical trilogy, “Pitch Perfect 2,” made $4.6 million from previews in 2015, though it faced much less competition in the form of a third-weekend “Avengers: Age of Ultron” and the R-Rated “Mad Max: Fury Road,” whereas “PP3” will have to contend against four other new wide releases this weekend along with several awards contenders and “Star Wars: The Last Jedi.” Also, while critics embraced the two previous “Pitch Perfect” films, with 80 percent on Rotten Tomatoes for the first film and 65 percent for the sequel, they panned this final installment with just 28 percent.

Directed by Trish Sie from a script by Kay Cannon, “Pitch Perfect 3” sees the entire cast from the previous two films reunite as the Bellas have one last performance together during a USO tour. Kendrick stars with a cast including  Rebel Wilson, Hailee Steinfeld, and Brittany Snow. The film, which screened on 2,600 screens on Thursday, has been projected for a $25 million four-day opening from 3,447 screens. Sources tell TheWrap the film has an estimated $45 million budget.

Also releasing this weekend is Paramount’s “Downsizing,” which made $425,000 on Thursday from 1,900 screens. Written and directed by Alexander Payne, this sci-fi tale about a struggling middle class man (Matt Damon) who shrinks to miniature size to enter a new society was met with mixed reviews when it debuted at the Venice Film Festival, scoring a 58 percent RT score. It’s looking at a four-day opening in the low teens against a reported budget of $68 million and will be released on 2,600 screens. Christoph Waltz, Hong Chau, and Kristen Wiig also star.

As for Wednesday’s releases, Sony’s “Jumanji: Welcome to the Jungle” continues to bring in solid returns with $7.5 million on Thursday, giving it a running total of $16.6 million through two days. Fox/Chernin Entertainment’s “The Greatest Showman” added $2.1 million to bring its total to $4.5 million. Meanwhile, “Star Wars: The Last Jedi” took the lion’s share with $17.9 million on its first Thursday, bringing it close to the $300 million domestic mark with $296.6 million after seven days in theaters.