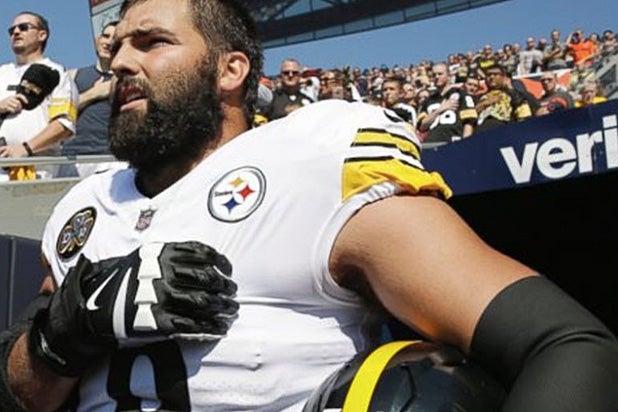 Pittsburgh Steelers left tackle Alejandro Villanueva had the highest-selling jersey in the NFL for 24 hours after he stood during the national anthem Sunday, and on Tuesday ESPN’s Adam Schefter‏ reported that he is donating all the proceeds to military charities.

“Steelers’ Alejandro Villanueva is donating all proceeds on his jersey/apparel sales to USO and other military non-profits, as he always has,” the NFL guru tweeted.

Steelers’ Alejandro Villanueva is donating all proceeds on his jersey/apparel sales to USO and other military non-profits, as he always has.

Villanueva was thrust into the middle of the midst of political unrest between the president and the NFL on Sunday when he was the only Steelers player standing with his hand on his heart during the anthem.

The former Army Ranger who toured in Afghanistan later said that hadn’t intended to break with his teammates.

The Steelers were one of several teams who pledged to remain in the locker room ahead of the game in light of President Trump’s comments about NFL players who knelt during the national anthem to protest the treatment of African Americans.

On Monday night, Jerry Jones and the Dallas Cowboys all took a knee before the “MNF” game, before standing while “American Idol” alum Jordin Sparks actually sung the anthem.

Trump inspired a wave of protests over the weekend when he said players who protested during the anthem should be fired at an Alabama Rally. On Saturday, he tweeted “If a player wants the privilege of making millions of dollars in the NFL,or other leagues, he or she should not be allowed to disrespect our Great American Flag (or Country) and should stand for the National Anthem. If not, YOU’RE FIRED. Find something else to do!”

On Tuesday, ESPN highlighted Villanueva’s Regular Joe lifestyle compared to other more opulent NFL stars, from carpooling to work and driving a Ford F-150 with 140,000 on the clock, to his fallback plan of becoming a business student at Carnegie Mellon in downtown Pittsburgh if the NFL didn’t work out.

“It’s actually the hardest thing service people do — I’m in the same boat,” he said. “I’m trying to have a successful transition to civilian life. I don’t think I’ve done it yet. It is the No. 1 biggest challenge for veterans in the United States. You go from a completely different world to a completely different universe. … For me to get educated is when I put all the leverage on my side.”