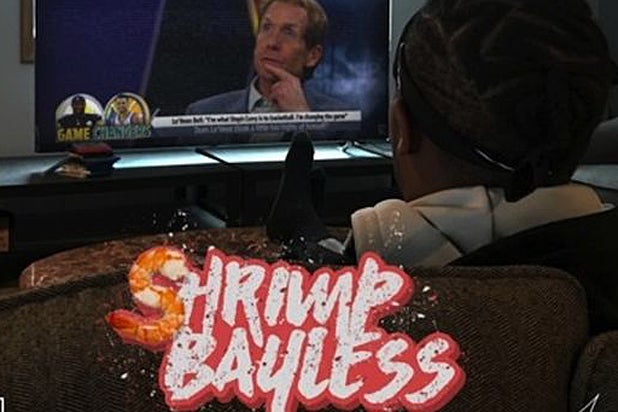 There’s no doubting Le’Veon Bell’s abilities on the field, but did anyone know that he could rap, too?

Even better, the Pittsburgh Steelers running back is using his hip-hop skills to tackle his on-air nemesis, Fox Sports’ talent Skip Bayless.

And while the Steelers won’t be playing in Super Bowl LI after being blown out by the New England Patriots in the AFC Championship game, Bell torched the “Undisputed” host with his diss track “Shrimp Bayless” on Monday.

“Shrimp Bayless, I been hearing you lately. You love Jerry way too much you actin like y’all related. I got the Hall of Fame waiting, I’m the best and you hate it,” Bells raps.

“Probably ’cause my name is mentioned close with some of the greatest. And then they talk about patience, you close to testing my patience. You say whatever for ratings,” he continues.

“Sometimes I hate that you’re breathing, I think you’re a germ.” OUCH.

Bell continues to blast Bayless with his rhyming tunes, deftly mixing in soundbites from “First Take” and FS1 debate show “Undisputed” to attack the host with his own words, even bringing up the never-ending Deflategate saga.

“If you keep talking all that nonsense I might call Richard Sherm … Deflate ya just like I’m Brady,” he says.

This is not the first time Bell has gone on the offensive against Bayless.

Last May, he dropped a track called “Rubberbandz” after the sports media personality slammed him for complaining that other players were intentionally trying to hurt him.

“This is unbecoming of a Pittsburgh Steeler to come across as whining. Just shut up and go beat them next year,” Bayless had said.

I need to get on 1st take cuz I'm tired of @RealSkipBayless tlkin this & that when it comes to me! say what u need to say to me to my face

Bayless is currently in Houston covering the upcoming Super Bowl between the Patriots and the Atlanta Falcons for Fox Sports. Meanwhile, Bell is currently on vacation until minicamp in the spring and free to try out his musical aspirations.

Listen to his latest creation on Sound Cloud below.