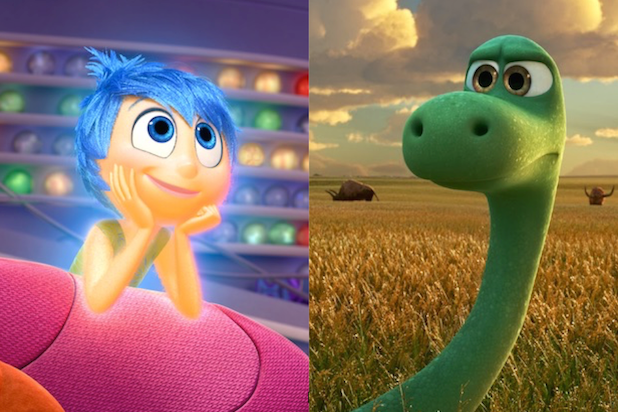 Pixar movies “Inside Out” and “The Good Dinosaur” topped all other films in nominations for the 43rd annual Annie Awards, the main awards given out to honor all facets of animation.

In the top category, Best Animated Feature, “Inside Out,” “The Good Dinosaur” and “Anomalisa” will compete against Aardman Animation’s “Shaun the Sheep the Movie” and Blue Sky Studios’ “The Peanuts Movie,” both of which received four nominations.

All of the films thought to be serious contenders for the animated-feature Oscar scored multiple Annie nominations, with GKIDS’ “Kahlil Gibran‘s The Prophet” and “Boy and the World,” DreamWorks Animation’s “Home” and Sony Pictures Animation’s “Hotel Transylvania 2” each scoring three nominations.

Actors nominated for their voice work in animated films or television shows include Jennifer Jason Leigh for “Anomalisa,” Jon Hamm for “Minions,” Amy Poehler and Phyllis Smith for “Inside Out,” Kristen Schaal for “Bob’s Burgers,” Larainne Newman for “Dawn of the Croods” and Alan Tudyk for “Star vs the Forces of Evil.”

The Annie Awards are handed out by the Los Angeles branch of the International Animated Film Association, ASIFA-Hollywood.

In the 14 years the Academy has given out an award for Best Animated Feature, the Annie winner has gone on to win the Oscar nine times. No film has ever won the animation Oscar without first being nominated in the top Annie category — and you’d have to go back to 2004 to find the last Oscar nominee that hadn’t already been an Annie nominee.

The Annie Awards will take place on February 6, 2016 at Royce Hall on the UCLA campus.

The full list of individuals and episodes nominated in each category can be found at the Annies website.

Best Animated Special Production
“Elf: Buddy’s Musical Christmas”
“He Named Me Malala”
“I Am A Witness”
“Kite”
“Kurt Cobain: Montage of Heck”
“Niko and the Sword of Light”

Best Animated Television/Broadcast Commercial
“Chex Party Mix: “Holiday Magic”
“Man and Dog”
“Michelin Total Performance: All the Performances In Every Tire”
“We Are All Farmers”

Animated Effects in an Animated Production
“Home”
“Hotel Transylvania 2”
“Inside Out”
“Minions”
“The Good Dinosaur”
“The SpongeBob Movie: Sponge Out of Water”

“Dragons: Race to the Edge”
Episode: “Have Dragon Will Travel, Part 1,” Chi-Ho Chan

Production Design in an Animated Television / Broadcast Production
“Dawn of the Croods”
Episode: “Garden of Eaten”

Storyboarding in an Animated Television / Broadcast Production
“Adventure Time”
“Dragons: Race to the Edge”
“Niko and the Sword of Light”
“Steven Universe”
“The Adventures of Puss in Boots”
“Wander Over Yonder”
“We Bare Bears”