In a bid to attract otherworldly buzz for its upcoming animated comedy "Planet 51," Columbia Pictures has arranged to have the film orbit the planet. The film won’t be available on Earth until it bows in theaters on Nov. 20, but it is currently safely ensconced in the International Space Station. 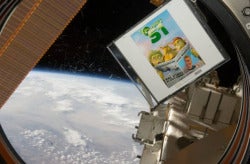 To make its orbital premiere, the film was launched into space aboard the Space Shuttle Discovery in late August and was transferred to the space station by astronauts a few days later. Currently, it’s cruising above Earth at 17,500 miles per hour and orbiting the planet every 90 minutes — the exact running time of the movie. A copy of the film has been made available for the astronauts to view.

In a joint statement, producers Guy Collins and Ignacio Perez said, “’Planet 51’ is a fun film for all the family and one of its strong messages, particularly for children, is to not be afraid of the unknown. That is what NASA has been showing the world for 50 years, and I hope that our film will encourage children to increase their understanding of the universe and NASA’s work.”

A photo accompanying the announcement shows a disc of the film floating weightlessly in space. The photo mimics a shot from the film, in which Lem, an alien from Planet 51, observes his home planet from the window of a spaceship for the first time.