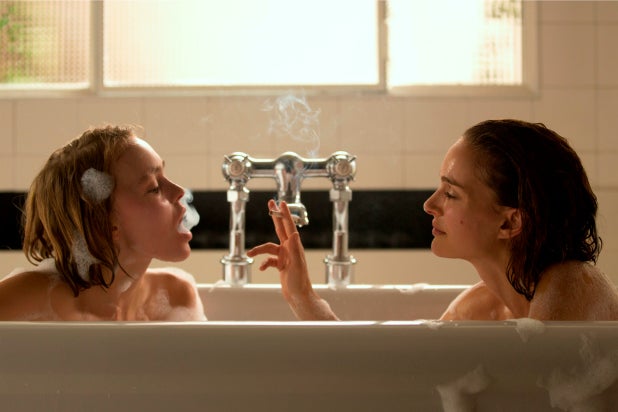 A commanding, exquisitely-lit and -outfitted Natalie Portman slipping between French and English would be an asset to any filmmaker looking to evoke something powerfully intimate from a story set in 1930’s Paris.

But “Planetarium,” Rebecca Zlotowski’s flirtatiously arty period drama starring Portman and Lily-Rose Depp (“Yoga Hosers”) as tight-knit sisters and performing mediums swirling around the worlds of spiritualism and cinema, is a movie of only superficial pleasures, offering little emotional resonance beyond an expected late-act leaning toward Europe’s troubles to come.

Aside from curiosity from Portman fans who just want to see more of an actress who seemed to disappear post-Oscar, there’s little about this glossy, ironically spirit-less affair to ignite the imagination.

Zlotowski’s inspirations are certainly movie-worthy: the real-life (and infamous) Fox sisters, 19th century American clairvoyants who became worldwide legends by convincing people they could speak to the dead. In that vein, she and co-screenwriter Robin Campillo (“The Class”) have conjured up the fictional Barlow sisters from Rochester, N.Y., traveling stars of the séance who arrive in the City of Lights after a long world tour.

Sharp-eyed, opportunity-grabbing Laura (Portman) is clearly the brains of the outfit, while Kate (Depp, sporting a slit right eyebrow like an offbeat beauty mark) is the intense channeler who seems entirely dependent on her older sister, and perhaps a tad cut off from reality. Their act — as we see early on, in a moodily lit nightclub filled with upper crust Parisians (and, for clunky metaphoric purposes, a large human-sized cage with colorful birds) — mixes portentous narration (“Are you ready for the truth?”) and closed-eyed, heavy-breathing showmanship.

That same night, the sisters earn the attention of a middle-aged, financially beset movie producer named Korben (Emmanuel Salinger, “Declaration of War”), who wants a private session with the Barlows, inviting them to his expensive home. Convinced his personal séance time has led to the appearance of someone from his past — Zlotowski, keen on preserving some mystery to Kate’s “gift,” inserts shots of boots sitting at the table’s empty chair and shows Korben reacting to a supposed ghost strangling — the impresario becomes possessed with the idea of filming the sisters and making them exponentially more famous. He also insists they move into his house.

On the day of shooting, however, Laura wins over everyone with her presence and personality, and after proven by screen tests (lovingly recreated in Academy ratio black-and-white and era-saturated color), she’s asked to star in the company’s upcoming film as, what else, a charismatic medium. The glamour and intensity of acting seduces Laura, and though she sees movies as a chance to explore her own talent, as it were, it effectively breaks up the siblings’ act.

Laura’s success also leaves the vulnerable Kate in the hands of the increasingly spirit-obsessed Korben. In one scene, Laura hears a man’s and woman’s athletic huffing and puffing through the bathroom grate and assumes the worst, but when she investigates, it’s her sister and their benefactor holding hands in an especially hyperventilating spirit-summoning session. Laura’s no less disturbed just because they aren’t being sexual; in fact, the intimacy of her sister performing a séance without her still comes with a mixture of betrayal and guilt.

Also Read: Natalie Portman to Star in HBO Miniseries 'We Are All Completely Beside Ourselves'

The problem is that the sisters’ bond is weakly rendered, and hard to latch onto amidst the glittering design and fanciful directorial touches (irises, slow motion, lush visuals). Portman is a stronger force than the more facilely ethereal Depp, but the Oscar winner’s star wattage alone isn’t enough. Salinger, meanwhile, is stuck with a character more idiot than tragic fool, and his trajectory doesn’t carry the dramatic weight Zlotowski intends.

“Planetarium,” which yes, includes shots of fake, twinkling stars, is essentially melodrama over-massaged until its various strands dissolve into nothing. Allure and artifice are its grand themes, and also its problem, as Zlotowski’s emphasis on the sensuality of belief and how it blinds us to reality never gels into a potent cinematic idea, even as the director’s passion for the power of movies is sumptuously rendered by cinematographer George Lechaptois (“Disorder”). Rather, we get beautiful faces in states of ecstatic, lips-parted possession (admittedly, Portman’s good at that), or half-formed scenes that rarely feel connected to anything larger in the narrative.

When the movie splits up the sisters, sending Laura to the south of France for a movie-set romantic subplot, while Kate innocently allows Korben to make her a guinea pig at a metaphysics institute, a frisson of tension arises over the consequences of the Barlows’ separation. But it’s short-lived, and the rushed nature of the melancholic last act’s many fate-deciding narrative threads feels contrived, especially as it pertains to the impending war and its corrosive politics.

Though its mix of European romanticism, lustrous trappings, and nostalgic movie love can occasionally make “Planetarium” feel like a galaxy all its own, the effect is more illusory than enveloping.