A Pennsylvania branch of Planned Parenthood raised eyebrows Tuesday after tweeting that Disney should widen its animated princesses to include one “who’s had an abortion” and “an undocumented immigrant.”

The tweet was deleted about two hours after being posted  — but of course the Internet never forgets. 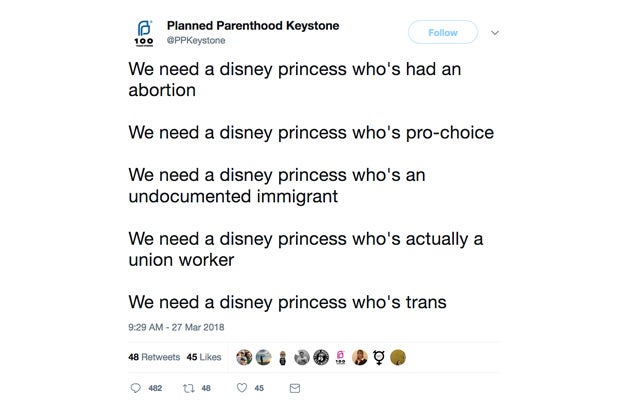 Also Read: 'Morning Joe': 'The President Has Difficulty Reading, I Know That for a Fact' (Video)

“Today, we joined an ongoing Twitter conversation about the kinds of princesses people want to see in an attempt to make a point about the importance of telling stories that challenge stigma and championing stories that too often don’t get told,” Melissa Reed, President and CEO, Planned Parenthood Keystone told TheWrap.

“Upon reflection, we decided that the seriousness of the point we were trying to make was not appropriate for the subject matter or context, and we removed the tweet.”

Despite its brief life online, the aborted tweet still came in for withering mockery, with screenshots rollicking around conservative media types.

We need a Disney princess who stumps for sex-selective abortions on the taxpayer dime then lectures us about what small children they would have killed should watch for entertainment https://t.co/957a8YQAly

Though Planned Parenthood says its focus ison women’s health, it’s not the first time one of its local affiliates have waded into more divisive cultural issues.

Earlier this month, a Kentucky branch drew scorn from actor James Woods and others for asserting that “some men have a uterus.”

No. They do not. pic.twitter.com/fVhebtnE7v

In the Trump era, Planned Parenthood has come under increasing political attack for providing contraception and abortion services, and has been the subject of a sustained campaign to discredit and defund the organization.

Last year, the organization was the subject of legislation giving individual states the ability to withhold funding from its programs.