It was 2003 — and later that year, Pixar’s aquatic-based cartoon feature “Finding Nemo” would gross $864.6 million at the global box office and break DVD sales records. Still, at the time, toy manufacturers and merchandisers weren’t much interested in clownfish — or much of anything that wasn’t already a household name.
“You look at a company like Pixar, which traditionally hasn’t produced a lot of sequels, and their movies have always done great at the box office, but they haven’t always done great when it comes to licensing,” noted Brochstein, senior VP of industry relations for the International Licensing Industry Merchandisers Association (widely known as LIMA). 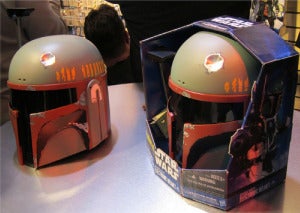 With the toy industry – which is great shape, by recessionary standards — wrapping up its latest Javitz Center trade show Wednesday, the dominance of established brands was re-asserted.
And anyone at the Javitz who stridently criticizes the film studios and TV networks for their reliance on sequels, prequels, remakes and reboots saw the monetary incentive further laid bare — the increasingly important revenue stream of toy licensing is dominated by well-known characters, not new intellectual property.
As usual, the big rollouts and announcements centered on established entertainment properties.
Fresh off signing a huge, 10-year master toy license with Sesame Workshop, toy giant Hasbro rolled out the first of its “Sesame Street” goods, which included branded Play-Doh sets featuring Elmo, Big Bird and the rest of the PBS puppet panorama.
Hasbro, meanwhile, touted a whole line of Marvel-licensed action figures, helmets and walking remote-control robots tied to Paramount’s upcoming release of “Iron Man 2,” as well as vintage “Star Wars” figurines set against the 30th anniversary of “The Empire Strikes Back.”
Also at the Toy Fair, DreamWorks added Kloroform to its “Shrek Forever After” campaign, with the Quebec-based manufacturer set to produce a series of 15-inch ogre-themed dolls.
And Disney Consumer Products — the top entertainment licensor, reporting a whopping $30 billion in global sales in 2008, more than the Mouse’s theatrical and home divisions brought in combined — announced a huge campaign surrounding its May 6 release of “Toy Story 3.”
As Pixar chief John Lasseter noted at a Toy Fair function over the weekend, when his studio’s “Toy Story” franchise was introduced back in 1995, only 60,000 of the now-iconic “Buzz Lightyear” dolls were manufactured. According to the Los Angeles Times, 35 million have been sold since.
“Brands like that have to establish themselves,” Brochstein explained.
According to research firm the NPD Group, about 25 percent of the $21.5 billion in toys sold in the U.S. in 2009 (roughly $5.4 billion) were based on some kind of licensed property, mostly films and TV shows.
Established brands like Hasbro’s “Transformers” line — a top-five toy property in 2009 — drove that figure, generating $592 million in sales, according to NPD. That was up 20 percent from 2007, when Paramount released the first “Tranformers” movie.
Of course, established brands have to start somewhere to get, well, established.
With its 3D feature “How to Train Your Dragon” hitting theaters March 26, DreamWorks Animation announced a small line of film-inspired toys that will be sold exclusively through Wal-Mart.
Viacom Consumer Products, meanwhile, is fitting in time and resources away from its ubiquitous “Dora the Explorer” campaign to launch a small line of products tied to M. Night Shyamalan’s “The Last Air Bender.”
“It’s always been a struggle to get on retailers’ shelves, but once you do, you can be very successful,” noted Brochstein. “That said, it’s become very, very challenging for newer properties, and that’s not just because of the recession. We’ve had consolidation at retail and manufacturing for several years.”
Brochstein believes that consolidation process – which has seen retail shelf space shrink as big-box retailers like Wal-Mart and Target own an increasingly larger share of the market – is beginning to ebb.
Meanwhile, the better news for studios and their toy-making/selling partners is that the overall toy industry – which declined only 1 percent in 2009 amid the worst consumer confidence indexes on record – once again seems poised for growth.
In fact, toy unit sales were up 4 percent in the fourth quarter of 2009.
“(Last year) was a remarkably uneventful year for the toy industry, but in a good way,” said NPD toy-industry analyst Anita Frazier. “In a time of continued economic turmoil, toy industry revenues were very stable, and the uptick in unit sales in the fourth quarter is a very positive sign for the industry heading into 2010.
x
Looks like you're enjoying reading