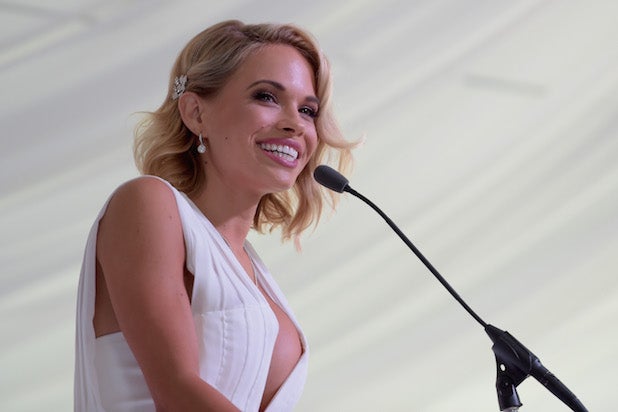 In what may be a first for a Playboy Playmate, Dani Mathers was slammed for posting a picture of a naked woman on Thursday.

Mathers snapped a photo of a woman showering at an L.A. Fitness gym without her knowledge, and then posted it to her Snapchat with the caption, “If I can’t unsee this then you can’t either.”

She then shared a picture of herself laughing — but no one was laughing with her.

Instead, Mathers received backlash for body shaming, with a number of Twitter users even calling for her arrest.

Also, can we please add #danimathers to the list of people we actually have to fear in the restroom? You know. NOT a #trans person.

No wonder, so many people suffer from eating disorders and anxiety (indcluding myself), when humans like #danimathers still exist.????

So when is #danimathers going to be arrested for taking naked pics of women at the gym and posting them on snapchat @LAPDHQ ?

#danimathers All the "I'm sorry I'm getting backlash" posts won't change the fact that what you did was utterly despicable and unforgivable.

She admitted to it. Body shaming is what she does w/friends. She just got caught. And that woman should sue the hell outta her. #DaniMathers

Wow what an ugly personalty you have there good luck putting make-up on that. #Danimathers

Mathers has since apologized in a Snapchat video. Saying that because she’s new to the social media app, she accidentally posted the photo to her story instead of sending to a friend. She promised that she would never do it again.

“I have chosen to do what I do for a living because I love the female body,” said the Playmate. “I know that body shaming is wrong and that’s not what I’m about.”

L.A. Fitness has decided to take action against Mathers.

“Her behavior is appalling and puts every member’s privacy at risk,” a spokesperson for the gym told TMZ. “We have handled this internally and also notified the police.”

“This is not only our rule it is just common decency,” said the spokesperson.

TheWrap did not include the Snapchat in question out of respect for the unidentified woman who was photographed in the locker room without her permission.