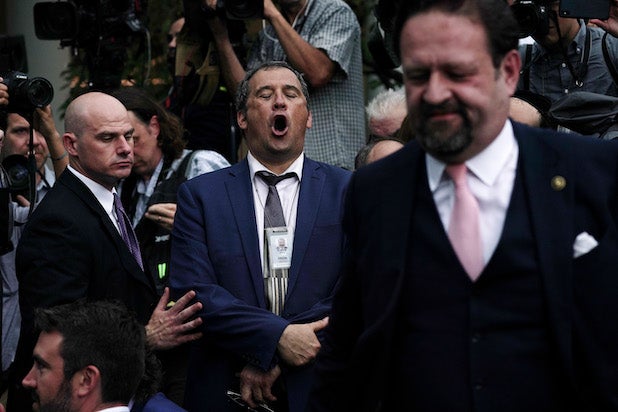 Karem’s suit, filed on Monday, calls for a court order to immediately reinstate his pass for the sake of his job and declare the suspension as being unconstitutional.

“I am certain that the suspension of my White House hard pass not only destroys my ability to perform my current job, but will severely hamper the rest of my career,” Karem declared in the suit, which was filed on Monday. “Unless my hard pass is restored immediately, I am confident that I will never be able to work as a White House correspondent for any publication for the rest of my career.”

Karem’s pass was first suspended for 30 days following an incident at the White House Rose Garden between Karem and Sebastian Gorka, a conservative radio talk show host, former Breitbart editor and Trump’s former deputy assistant. The two had a heated interaction at the president’s Social Media Summit, where several conservative bloggers and other social media figures who were supportive of Trump, gathered. According to the suit, Trump did not respond to Karem’s request to ask questions. “Conservative media activists taunted the White House press,” the suit said, and Karem attempted to “diffuse the situation with humor” by saying, “This a group of people that are eager for demonic possession.”

Following this comment, according to the suit, Gorka “loudly accused Karem of ‘threatening’ him, and hollered in his face, ‘You are a punk! You’re not a journalist! You’re a punk!” while Karem responded by telling Gorka to “go home” and “get a job.”

Three weeks after the incident, Gresham told Karem that a “preliminary decision” to suspend his hard pass for 30 days was approved by Trump, according to the suit. By Aug. 16, Gresham said the decision was final and that Karem had violated “widely-shared understandings and norms of media professionalism,” the suit said.

The suit says that Gresham violated Karem’s due process rights and asks the court to “vacate the suspension and order that Karem’s hard pass be immediately restored. The suspension is arbitrary, unlawful, and unconstitutional.”

In an email to Politico on Tuesday, Grisham said she had not seen the lawsuit yet.