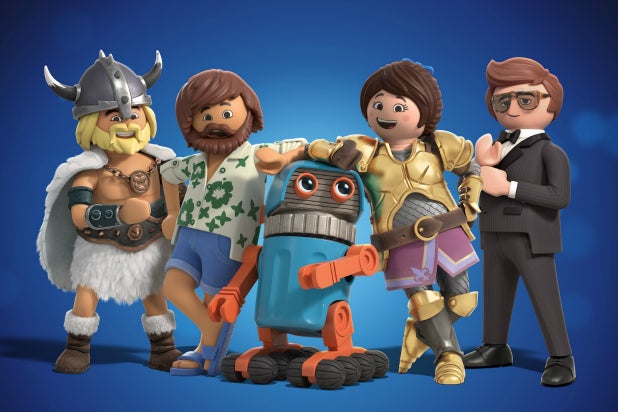 STXfilms announced on Thursday that it has acquired domestic distribution rights for ON Animation Studio’s upcoming adventure “Playmobil: The Movie.”

The film, inspired by the Playmobil role-play toys, will take audiences on an epic comedy adventure through a sprawling imaginative universe.

When her younger brother Charlie (Gabriel Bateman) unexpectedly disappears into the magical, animated universe of Playmobil, unprepared Marla (Anya Taylor Joy) must go on a quest of a lifetime to bring him home, and team up with some unlikely and heroic new friends along the way.

“‘Playmobil: The Movie’ is an action-packed animated adventure led by a fantastic cast and the inimitable Lino DiSalvo,” STXfilms Chairman Adam Fogelson said in a statement. “We’re thrilled to partner with On Animation Studios on this fun and original project, and look forward bringing a fresh take on the iconic Playmobil toy to the big screen for audiences across the U.S.”

“Playmobil: The Movie” is directed by Disney and animation veteran Lino DiSalvo (“Frozen” and “Tangled”) and written by Blaise Hemingway, Greg Erb and Jason Oremland.

The film is expected to open in theaters wordwide later this year.

“Rodolphe Buet and I are very excited to partner with Adam and his team at STX to enable American audiences to discover this great movie full of surprises, inventive comedy and memorable songs.” Aton Soumache, chairman of ON Animation Studios, said in a statement. “The iconic Playmobil brand’s endless storytelling, roleplay and world-building possibilities have been an inexhaustible source of inspiration and creativity for Lino DiSalvo, one of the greatest animation talents alive, who brought us his experience and delivered an amazing adventure which will appeal to everyone, everywhere.”