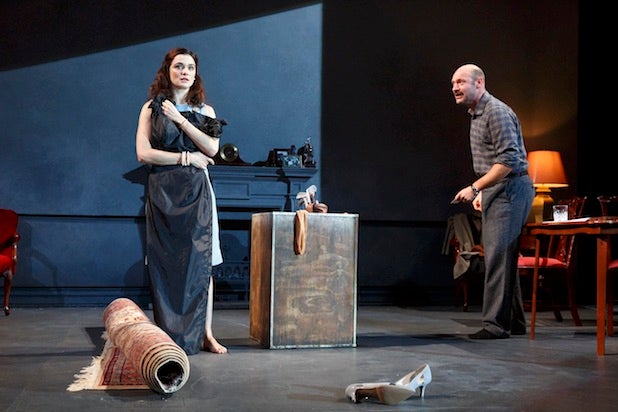 David Hare’s “Plenty” returned Sunday to the Public Theater, the scene of its American debut in 1982. Back then, both the play and its leading actress, Kate Nelligan, took on the instant status of greatness, an impression reinforced the following year when the staging, directed by David Hare, transferred to Broadway.

There was something revolutionary about the play and its character, Susan Traherne. Hare played with time like few writers before him, the scenes not performed in chronological order. Equally challenging, theatergoers who’d been mesmerized by plays about women named Martha and Hedda were more than shocked by Susan’s disintegration into bottomless disappointment and anger, her expectations of plenty shattered as the United Kingdom lost its empire in the wake of World War II.

Nelligan’s performance was without apologies. When halfway through act one she entered shooting a gun, she appeared nothing more than extremely pissed off. Her cynical digs at men’s looks and ineptitude were so off-hand that audiences either missed them or laughed several beats after the barbs slipped from her mouth.

In the movie version, Meryl Streep played Susan as a weepy victim, and sunk the enterprise.

Rachel Weisz in the Public revival, directed by David Leveaux, takes an entirely different approach from either Streep or Nelligan. She’s definitely no victim, but where Nelligan was irate, first and foremost, and descended into a kind of nihilistic bitterness, Weisz is just plain crazy.

Susan single-handedly ruins the diplomatic career of her husband (the overly sympathetic Corey Stoll). Whereas Nelligan conveyed the impression that Susan was railing against an entire economic and political system, the recent Suez Canal fiasco being a particular irritant, Weisz’s take makes it more personal. Watching her, you simply regret that the 1950s weren’t more advanced when it came to meds.

Has time inflated Nelligan’s performance? Possibly. Certainly, Hare’s drama doesn’t play as well as memory serves. At least in this revival. Susan remains a complex portrait, as does her doomed marriage, but beyond that small orbit of two people, the other characters often register as mere devices. Her roommate Alice (Emily Bergl doing Arden British-style) is a sounding board and not much more.

And there are bigger disappointments for aficionados of “Plenty.” Minor characters are often ridiculed for no good purpose other than to induce easy laughs. A young woman (Dani de Waal) wanting an abortion is talked down to for, well, being young. More painfully executed (in more ways than one) is the character of Mme. Aung (Ann Sanders), a diplomat’s wife, who makes the mistake of identifying Ingmar Bergman as Norwegian. The scene ends with this dignified Asian woman being mocked for speaking in a language about a culture that is not her own.