“Pokemon Go” took the summer by storm – and it’s ended up making a lot of money too.

The Nintendo app has hauled in $440 million worldwide to-date, which also actually places ahead of a number of high-profile blockbuster films. While the initial download of the app is free, “Pokemon Go” makes money through in-app purchases.

According to a comparison by research firm Sensor Tower, the smartphone-based video game has bested the box office for “Warcraft,” “Independence Day 2,” “The Angry Birds Movie,” “Star Trek Beyond” and “Ghostbusters 2.” In case you don’t believe us, check out the company’s  chart below. 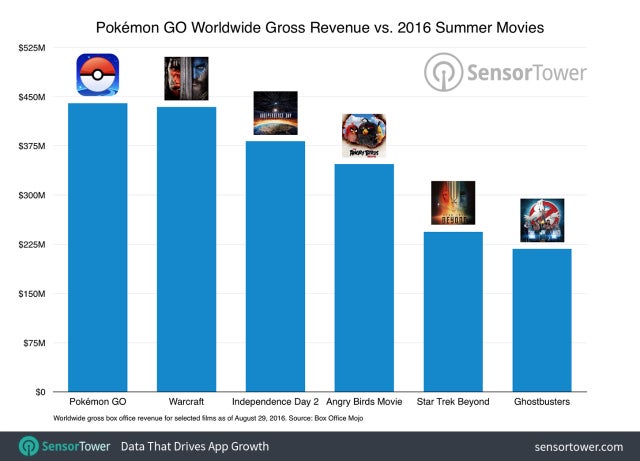 “Pokemon Go” should have staying power beyond that of a typical summer movie. Per the Sensor Tower report, the cell phone game added more than $100 million in net revenue during August. It continues to pull about $4 million net revenue daily worldwide — you’ve been officially put on notice, “Secret Life of Pets.”

The Pokemon franchise revival has passed 180 million worldwide downloads on iOS and Android. It’s still being used for more than 30 minutes per day by an average user.

Sensor Tower’s revenue figures are an estimate generated by its platform, which relies on an algorithmic model of the App Store and Google Play.

Have fun playing ”Pokemon Go,“ but make sure you stay safe while doing so