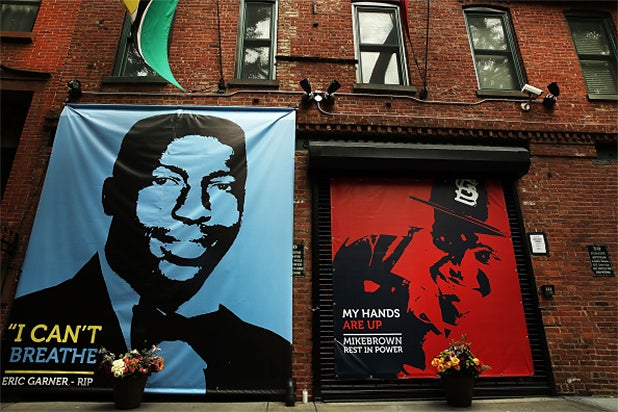 A Staten Island grand jury has voted not to indict NYPD officer Daniel Pantaleo in the death of Eric Garner, the unarmed black man who died after being put in a police chokehold last July.

The decision — coming down less than two weeks after a St. Louis grand jury voted not to indict Darren Wilson, the cop who shot and killed unarmed teenager Michael Brown in Ferguson, Missouri — has sparked outrage and protests across New York City and social media.

Hundreds of protestors quickly took to the streets of New York City, staging a “Die In” at Grand Central Station and crowding into Times Square, chanting “I Can’t Breathe,” which were Garner’s last words. The medical examiner’s office ruled 43-year-old Garner’s death a homicide caused by the chokehold and the compression the officer put on his chest.

“Today’s outcome is one that many in our city did not want,” said de Blasio in a statement. “Yet New York City owns a proud and powerful tradition of expressing ourselves through nonviolent protest. We trust that those unhappy with today’s grand jury decision will make their views known in the same peaceful, constructive way.”

“This is an issue we’ve been dealing with for too long and it’s time for us to make more progress than we’ve made,” Obama said from the White House during the annual Tribal Nations Conference. “I’m absolutely committed as president of the United States to making sure that we have a country in which everyone believes in the core principle that we are equal under the law.”

The decision comes two days after Obama requested $263 million for body cameras and training for police officers to address the growing unrest that’s spread across the nation in the wake of the Ferguson grand jury decision.

Meanwhile, Hollywood stars from musician John Legend to director Spike Lee and actor Frank Grillo took to social media to express their anger over the decision.

“Fruitvale Station..all to familiar,” said actor Michael B. Jordan, referring to the film in which he played Oscar Grant, an unarmed man who was shot and killed by Bay Area BART police officer Johannes Mehserle in 2009. Unlike Wilson and Pantaleo, however, Mehserle was charged with murder for the killing. After pleading not guilty, he was ultimately only found guilty of involuntary manslaughter.

“Grey’s Anatomy” actor Jesse Williams, who was outspoken in his protest of the situation in Ferguson, tweeted: “Grand Jury says guy choking person to death in front of all of us, is not worth looking into.”

Hashtags including #ICantBreathe and #RIPEricGarner were also trending high on Twitter following the Garner decision Wednesday, as well as #CrimingWhileWhite, which people used to share stories of white Americans’altercations with law enforcement ending in much tamer fashions.

Deep Hurt. We're Men. Human. We feel pain. There will be one collective cry added to these tears.Then the birth of a New Anger. #EricGarner

I am stunned by the failure to indict Eric Garner's killer.

Police chokeholds are banned. #EricGarner's death was ruled a homicide. A cop put him in a banned chokehold & killed him. It's on TAPE….

Grand Jury says guy choking person to death in front of all of us, is not worth looking into. http://t.co/LyAgSEEpaK pic.twitter.com/OCowjA78PS

Cop cleared in chokehold death of Eric Garner via @NYPost THIS IS TRULY DISGUSTING. AND MURDER. http://t.co/J9rT73Fdqc

An individual or institution can't kill Eric Garner in that fashion & not be held accountable. #ChokedWhilePoor New America's not having it.

Due To The Decision Of The Staten Island Grand Jury On The Murder Of Eric Garner We Are Respectfully… http://t.co/4w5I9cJNbg