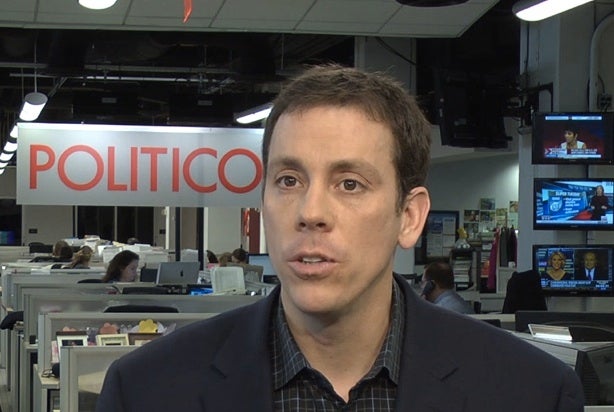 Jim VandeHei will bring his 15 years of covering Beltway wheeling and dealing to helping Politico and its new Big Apple bauble Capital New York in its quest to become the dominant force in political journalism.

VandeHei on Monday was elevated to president and chief executive officer of the site he co-founded in 2007 and Capital, a recent acquisition by publisher Robert Allbritton. VandeHei, formerly executive editor of Politico, told  TheWrap that he will be focused on the business and not the editorial end of the digital publications in his new role. John Harris, who left the Washington Post with VandeHei to form Politico, will continue as its editor-in-chief.

Also read: D.C. Drama Has Been Very Good for Politico

VandeHei spoke about the formula that has allowed Politico to become essential reading for Washington insiders and to explain why he’s confidant Jeff Bezos’ purchase of the Post won’t halt Politico’s meteoric rise.

I’ve been here from the beginning. I co-founded Politico sever years ago, so it’s not like I’m going from being a beat reporter at the Wall Street Journal to being the CEO of the company.

Will you still play a role in editorial decisions?
I will be totally focused on running the company. Those decisions will be made by John Harris, who has been with us since the beginning, so we’re in great hands. There needs to be a guard rail in place to keep the business robust while protecting the sanctity of our journalism.

I don’t believe that there needs to be as high a wall as between the business end and the editorial side as there is between church and state, but I will by no means dictate what our reporters are doing. At the same time, I will be busy helping the entire company understand how the product is being received by our readers and the realities of the marketplace.

Have you been profitable since your third year of operation, as has been reported?
That is correct. We’ve been lucky. We’ve basically been successful from day one, which is tough these days.

We’ve been able to make money because we’re a publication that caters to people who are obsessed and intense about policy and politics and we’ve been able to convert that influential audience into advertisers and subscribers.

Are your revenues more ad or subscription based?
Right now, it’s more ads than subscriptions, but our subscriptions [to premium service Politico Pro] are growing strong.

You bought Capital New York in September and plan to relaunch the site this fall. What should readers expect?
We’re going to do in New York what we’ve done in Washington. We’ll be looking at Albany and City Hall and also the business of media in a unique way. We’re going to be focused on issues like state and city politics and we’re going to do the same thing that we’ve done in Washington, which is going in with overwhelming force in terms of the number of reporters we have covering our core beats.

Why Capital though? What made you think this was the proper vehicle?
We’ve always been attracted to the New York market and we’re huge fans of Josh [Benson] and Tom [McGeveran], who are the editors of Capital. It’s no secret that we probably wouldn’t have purchased it were it not for the two of them. But we felt like we’d found kindred spirits in terms of their mentality and their focus and their approach to covering the news. We see them as a safe bet in terms of editorial leadership.

Would you consider buying another media property in another city?
[Politico’s publisher] Robert Allbritton has been very clear that he is interested in continuing to experiment in the digital space, so we’re always looking at any opportunity out there that exists to build our editorial product. We’ve got a robust plan in Washington and New York and right now I think that will define our focus in the next few months.

Politico has quickly made a name for itself in a crowded media space. What adjectives describe Politico’s coverage?
Authoritative. Blunt. Spot-on. Accurate. Hopefully, it’s writing that’s got some personality. Politics and policy is too often reported on in a boring way and is written in a voice that worked in a different era, but that doesn’t resonate today. Our voice is a little edgier.

There have big changes at your old home the Washington Post. Are you worried that Jeff Bezos’ decision to buy the paper makes your job harder?
No. Jeff Bezos is a genius and he’s rich, so he’s a formidable competitor, but we can’t get caught up with that stuff. We need to execute our plan with our people and we’ll be fine.

We have a formula that works for our readers, for our advertisers and our subscribers. And while I’m always interested in what Jeff Bezos and others are doing, what he decides to do is irrelevant to us. Our success will be determined by our ability to deliver the goods.