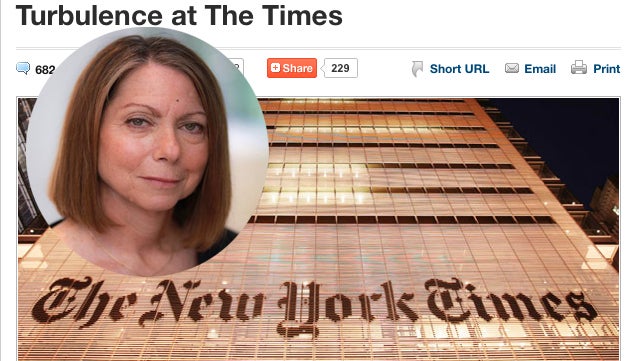 A takedown of New York Times executive editor Jill Abramson by Politico’s Dylan Byers on Wednesday is shocking in its depth and virulence.

According to the piece, Abramson – the first woman to be chief editor at the Gray Lady — is arrogant and aloof. She is absent and dismissive. And that voice!

OK, they’re right about the voice.

But the attack on Abramson is vicious and to all appearances the worst group teardown of a New York Times editor since Howell Raines lost his footing in the wake of the Jayson Blair scandal.

In this case there’s been no scandal to fuel the public lashing. It’s just a lashing. After recounting a contretemps with managing editor Dean Baquet in which he stormed out in a self-described "tantrum," the article cites more than a dozen current and former members of the editorial staff who "described her as stubborn and condescending, saying they found her difficult to work with."

The article goes on to say Abramson faces all but a newsroom mutiny:

"Just a year and a half into her tenure as executive editor, Abramson is already on the verge of losing the support of the newsroom. Staffers commend her skills and her experience but question whether she has the temperament to lead the paper. At times, they say, her attitude toward editors and reporters leaves everyone feeling demoralized; on other occasions, she can seem disengaged or uncaring.”

I worked for Abramson when she was managing editor to Bill Keller and did not find her to be any of those things. She played Rufus Wainwright music in her office when I came in once to chat.

Things may have changed now that she runs the place. Still, these criticisms sound like the stereotypical slurs so often leveled against women leaders. Where men are firm, women are tyrannical. Where men take no guff, women are disengaged and uncaring. I refer you all to much-cited research in Sheryl Sandberg’s "Lean In" book in which women leaders are consistently found to be "unlikable" even when compared to an identical person who just happened to have a male name.

Newsrooms are tough places, and none are tougher than the Times, where egos run amok and the ambition is thicker than Manhattan smog. Here’s an example of what might be Abramson being bitchy, and might just be her getting it done:

"In one meeting, Abramson was upset with a photograph that was on the homepage. Rather than asking for a change to be made after the meeting, she turned to the relevant editor and, according to sources with knowledge of the meeting, said bluntly, 'I don’t know why you’re still here. If I were you, I would leave now and change the photo.'"

I have to acknowledge some sympathy for Abramson. Editors are often more brusque than they want to appear. (Mea culpa, Wrap newsroom.)

But none of us enter the high-wire world of quality journalism and expect coddling. And I have personally found the New York Times to be a uniquely non-coddling (or some might say nurturing) place.

Is Abramson really so insensitive? Despite the dozen anonymous staffers, I can't tell.  Her job is to make sure the news comes first, that the readers are served and that the paper is good enough in the digital age to pay for — so that it doesn't disappear forever.