In the wake of President Obama’s election in November, there was a sense of anticlimax among the left-leaning media covering the event.

There was also at least a vague sense of a clock ticking.
After all, a number of liberal websites that were floated on the tidal wave of interest in the 2008 election — like the Huffington Post and Daily Kos — owed their rise to disillusionment with the Bush White House.
How would these sites fare in the post-election world, now that their guy had won?
As one web reporter told TheWrap shortly after Obama’s election, “I’m not sure. We’ll have plenty during the first 100 Days. The next 100 is the problem.” 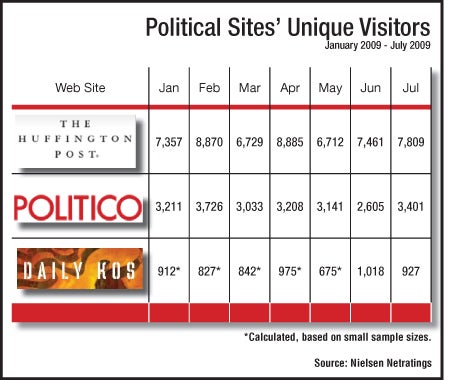 Turns out, they shouldn’t have worried.
According to Nielsen NetView, the Huffington Post had 7.81 million unique visitors in July – up from the 7.35 million it received in January. Politico had 3.4 million, up slightly over the 3.21 million it amassed in January. DailyKos, at 927,000, was up a fraction, too. (For a clickable list of political sites, see accompanying story, "A Guide for Political Junkies.")
Of course, it isn’t politics alone that is fueling these sites’ health. A close look at their continued rise reveal an array of strategies that are succeeding unexpectedly in the age of web-based news.
Huffpo’s growth is the result of a focused effort to move well beyond politics. The site — a liberal politico’s fantasy when it launched in 2005 — has expanded from its original mission into lifestyle, media and entertainment, while not shying from sex, gossip and innuendo in its coverage to drive page views and traffic.
Then there’s the decline of newspapers, in general — and the fact that people are increasingly in the habit of getting their news from other sources. Especially in the age of Google, when a search more often than not will return numerous places other than traditional outlets to find news.
Still, there’s no question that

hot-button issues like health care and the economy — and probably the continuing war waging between Republicans and Democrats, as well — have kept the political junkies looking for fodder from Washington.

“I think it’s an urban myth that traffic is dependent on the parties in power,” said John Byrne, editor and publisher of RawStory. “Traffic is quality, marketing and timing — though certainly a political scandal or two doesn’t hurt.”
Byrne agreed the health-care debate among liberals and the Obama Administration’s perceived slide to the middle are reasons for the Raw Story’s steady traffic. “Liberals are much more engaged than I thought they’d be, sparring with the administration over what they see as compromised positions.”
Markos Moulitsas, whose Daily Kos has seen traffic rise above pre-election levels — 1.2 million unique visitors in July, according to Quantcast, as opposed to 1.1 million in November — wrote in a post on his site: “[It] shows that the Daily Kos community remains as engaged as ever, regardless of who holds Congress and the White House, We continue to engage, confounding the know-nothings who predicted that site traffic would plummet at progressive outposts like this one after Obama was elected.”
The story is the same at Politico, which had roughly 3.6 million unique visitors in June — more than last June and as many as January, said Jim VandeHei, co-founder and executive editor. In fact, while newspapers are shedding reporters and editors, Politico’s staff size has actually grown about 10 percent since the election — and the site is still hiring.
“We had 95 employees at the beginning of the year,” VandeHei said. “We have 105 now.”
He said they put resources into the election, “but even more resources into other areas. For example, hiring a team to cover the White House, a team to cover Congress, someone to cover foreign policy. For our audience, the election is important, but so is everything else.”
Politico is also gearing up for the 2010 midterm elections, which VandeHei said are normally not as compelling for most. “For our audience, they are extraordinarily important.”
The Huffington Post, too, is growing — though mostly sideways.
“More than half of our traffic comes from people who are not interested in politics,” founder Arianna Huffington said. In the last two years, HuffPo launched entertainment and style verticals, and is prepping for the launch of books and technology sections next month, followed by sports — yes, sports — in October.
“We always knew that with our core values of news and opinion and community, we wanted to cover more than just politics,” Huffington said. “We needed to speak to more than that, to move like an Internet newspaper.
“Like any good newspaper, we would have deep coverage in other areas,” she said.
There were clues that the Huffington Post would be pushing its expansion in 2009 full throttle even before the election.
In November, the site completed a $15 million round of fundraising — with that money earmarked to help the site expand into local markets (HuffPo Chicago, New York and the upcoming Denver and L.A. editions) as well as fund more investigative journalism to complement its aggregation.
This, after a $5 million investment by Softbank Capital in 2006. (Eric Hippeau, an executive at that company, was named HuffPo’s CEO a few months ago,  replacing Betsy Morgan who was in the post for one year.)
There also have been upstarts — like AOL’s PoliticsDaily — that have been gaining momentum, despite launching after the inauguration.
In fact, as TechCrunch reported, PoliticsDaily, which launched in March, surpassed rival Politico in unique visits in May. (According to ComScore, PoliticsDaily received 2.4 million unique visitors compared to 1.1 million unique visitors for Politico. HuffPo got 5.3 million the same month.)
But traffic numbers, themselves, can sometimes be misleading.
“It’s worth noting that 60 percent of PoliticsDaily’s referral traffic

are the Drudge Report (18 percent share) and Digg (15 percent). Presumably, referrals also account for a smaller slice of Politico’s traffic than at PoliticsDaily.”
“Considering the awful and relentless slide

of AOL’s traffic,” he wrote, “Politico seems to be in a much more comfortable position, even with half of PoliticsDaily’s visitors. That doesn’t even account for repeat traffic to each site, their demographics, or targeted ad sales — all of which favor Politico.”
Where PoliticsDaily and other sites in AOL’s MediaGlow network have been particularly impressive is in the recruitment of talent. “I’m not going to deny that the availability of talent has accelerated many of our efforts,” Martin Moe, SVP at MediaGlow, told the New York Times recently. “Suddenly, in the last 18 months, this huge pool of talent has become available.”
The other part of HuffPo’s post-election world domination plan, meanwhile, is social media.
Earlier this month, Huffington announced a broad partnership with Facebook, allowing Huffington Post readers to share the stories they are commenting on with their Facebook friends. Huffington calls it the HuffPo version of a “digital water cooler.”
Was there a magic number — a million HuffPo/FacebookConnect users, say — to determine the success of the initiative?
“Really, it’s bigger than that,” Huffington said. “Really, we see this as the future of the Huffington Post.”
Really.
x
Looks like you're enjoying reading