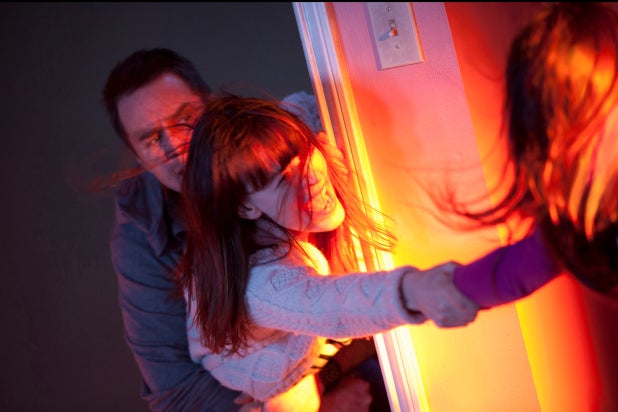 The TVs are bigger than they were in 1982, but the scares in the new “Poltergeist” don’t match the ones offered by director Tobe Hooper and producer Steven Spielberg the first time around.

This new spooky-house chiller never escapes the shadow of its predecessor, but it also pales next to the scores of subsequent movies — “The Conjuring,” “Insidious,” and “Paranormal Activity,” to name just a few — that have already stripped the original “Poltergeist” for parts.

Even if the results are forgettable, producer Sam Raimi has, if nothing else, assembled an impressive team. Director Gil Kenan made his directorial debut with the effective (and genre-adjacent) animated film “Monster House,” playwright David Lindsay-Abaire (“Rabbit Hole”) handles script duty, and casting directors Scot Boland and Victoria Burrows have put together a capable ensemble, from established players like Rosemarie DeWitt and Sam Rockwell as the put-upon homeowners to young Kyle Catlett as their son. (Catlett not only registers genuine fear and anxiety throughout, but he also looks like he could really be DeWitt’s child.)

Unfortunately, the wrong moves outnumber the right ones, and the attempts that this “Poltergeist” makes to stand on its own merely underscore what the original film did so brilliantly. Whereas the first movie, for example, shocked audiences by setting a haunted-house movie in an otherwise ordinary and normal-seeming suburb, this one lets us know right away that something’s amiss, from the giant power lines nearby to the bones barely buried in the yard to the box of clown dolls in the attic.

Yes. A box of clown dolls. As though a discovery like that wouldn’t make a new tenant immediately run screaming.

Anyway, it’s just the second night that Eric (Rockwell) and Amy Bowen (DeWitt) spend in their new house before youngest daughter Madison (Kennedi Clements) gets snatched up by the restless souls in the closet, and it’s only with the help of paranormal expert Claire (Jane Adams) and basic-cable ghostbuster Carrigan Burke (Jared Harris) that the Bowens can get their little girl back.

The film’s most effective scene is also the one that shows us the least: Claire’s skeptical assistant Boyd (Nicholas Braun, “Date and Switch”) has a creepy encounter involving an electric drill and an unseen entity on the other side of the wall. This is one of the few moments that Kenan and Lindsay-Abaire let us use our imagination; taking us into the parallel dimension of the ghostly departed isn’t nearly as terrifying as the suggestion of same that the original movie offered, and since we’re operating in the realm of PG-13 horror here, the gore is mild and the jolts are almost all of the jump-scare variety.

Given how little they have to work with, DeWitt and Rockwell — and even Adams and Harris, to a lesser extent — do what they can to inject recognizability into the sketchiest of stock characters, and Catlett, Clements, and Saxon Sharbino (“Touch”) as the three Bowen children create a significant amount of empathy; their reactions to the horrors taking place around them are often more effectively portrayed than the horrors themselves.

“Poltergeist” ultimately plays like the most perfunctory of remakes, one born of rights ownership and title marketability rather than a burning desire on anyone’s part to do something interesting or provocative with a classic. The 1982 original remains unassailable, all the more so when stood side by side with its pipsqueak descendant.