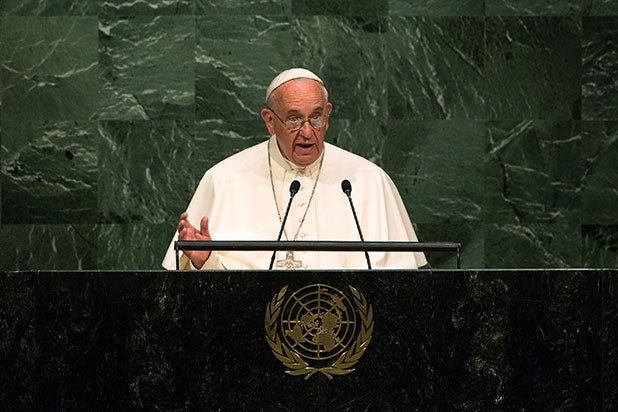 Catholics may have a hard time voting for Donald Trump after the leader of the Church said the GOP candidate is “not Christian.”

“A person who thinks only about building walls, wherever they may be, and not building bridges, is not Christian,” Pope Francis said Thursday, according to the Associated Press. “This is not in the Gospel.”

The Pope gave the comment in response to a reporter’s question during a news conference from the papal airliner, which was returning to Rome after a six-day trip to Mexico.

The religious leader said he hasn’t heard the specifics of Trump’s border plans, so he would “give him the benefit of the doubt,” but added, “I’d just say that this man is not Christian if he said it this way.”
The real estate billionaire infamously kicked off his presidential campaign by declaring Mexican immigrants have “lots of problems.” dangerous “rapists,”
“They’re bringing drugs. They’re bringing crime. They’re rapists. And some, I assume, are good people,” he said. Months later, he also introduced intentions to ban all Muslims from entering the United States.
Trump responded to the Pope’s dig at his faith at a campaign event in South Carolina Thursday.

“No leader, especially a religious leader, should have the right to question another man’s religion or faith,” he said. “[The Mexican government is] using the Pope as a pawn and they should be ashamed of themselves for doing so, especially when so many lives are involved and when illegal immigration is so rampant.”

Trump, or any other candidate, shouldn’t fear too much political commentary from the Pope, as he said he “was not going to get involved in” trying to influence how Catholics vote in the presidential election.