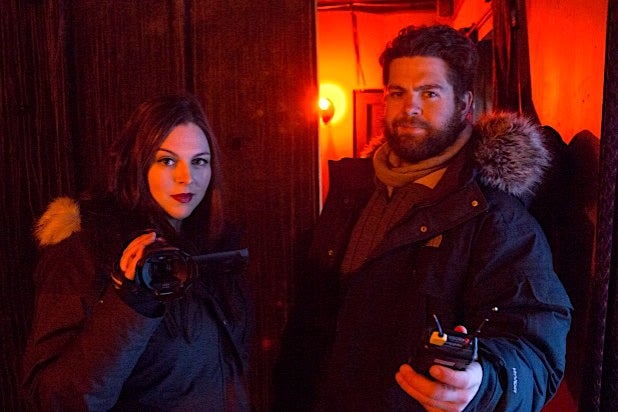 The airwaves may be packed with shows about brave (and some not-so brave) souls investigating haunted locations, but when it comes to attention-grabbing, intriguing titles, Travel Channel’s “Portals to Hell” has got them all beat. And this season, well, it’s gonna be a doozy.

Avid paranormal investigators Jack Osbourne (yes, Ozzy and Sharon’s kid) and Katrina Weidman head into Season 2 on March 13, scoping out historically haunted locations in the U.S. to seek concrete evidence that a spirit world exists. As Weidman puts it, “This season is intense.”

In the two-hour season premiere, the fearless duo investigates the 150-year-old Old Paulding Jail in Ohio, where they attempt to uncover the truth in a sea of rumors, cover-ups and theories of what happened to the young woman who was murdered there. They break down the last remaining sealed jail cell in the basement and not only find startling new evidence, but Osbourne is rocked by a paranormal experience that he won’t soon forget.

“Katrina and I are breaking down walls — literally,” Osbourne said. “We have unprecedented access to a number of locations and are also the first team to ever investigate some of them for TV. They’re incredibly active sites for the paranormal, and we’re going all-in to try and capture substantial evidence.”

“Jack and I purposefully explore locations that embody the darker side of the paranormal, as we try to understand why certain places evoke more sinister activity than others,” Weidman added, warning those faint of heart. “It’s exciting to see what new discoveries we can make in the paranormal field. Yet as we explore the unexplained, we can only presume to know what we’re working with. At the end of the day we really don’t — and that’s the scary part.”

Sure, ghost hunting can be a fun — although kinda weird, you have to admit — thing to do on a dark, stormy night, but going from, “Gosh, ghosts really interest me” to “I’m dedicating my life to investigating them” is quite a leap. But for both Osbourne and Weidman, they didn’t choose that career path… it chose them.

“I’ve tried to get out of the fields before a couple of years ago and it just pulls you back in and now it’s like I’m so into it that…I could never leave it because now it’s like, it’s almost a vendetta now,” said Weidman, who went from being a ghost enthusiast to a diehard researcher.

Osbourne is evolution as a paranormal investigator evolved in a similar way.

“I grew up watching paranormal shows, ghost hunting shows, ‘X-Files,’ all that genre, and I loved it,” Osbourne said. “When I was a kid, any opportunity to go check out a haunted house or go do a séance or to go do any of that kind of dumb stuff you do when you’re a kid, I love. So, for me, I kind of came into this as a fan of the genre and I was given the opportunity.”

Weidman added: “t just really gets under your skin and it gets into your blood. And I think once it’s there, I don’t know that you can ever rid yourself of it”

It goes without saying that ghosts and all things paranormal are a hot commodity right now. Just a quick glance at Travel Channel’s lineup will tell you that. But one can’t help wonder what came first: more ghost shows or more ghosts?

“I think people have always been interested in this, but it’s always been such a taboo subject so people don’t talk about it,” Weidman explained. “Especially in America, you go to another country and it’s not as taboo as part of their history. It’s part of their culture and America is very different. I think now, because of the media being out there, people are saying, ‘Oh, OK, that’s kind of cool. I can talk about it.’ And, ‘Oh, there’s other people that have had experiences like me. I can find them.’ And when the big boom of paranormal shows happened in like the late-’90s, early 2000s, you saw all the groups popping up because they were finding other people that had the same interest and they weren’t alone anymore.”

Upcoming locations for Season 2 of “Portals to Hell” include:

Season 2 of “Portals to Hell” begins Friday, March 13, with a two-hour premiere at 9 p.m. on The Travel Channel.

15 Facts About the 'Conjuring'-Verse Hauntings, Including 'The Nun' (Photos)

Here’s what’s based on real-life hauntings, and what isn’t