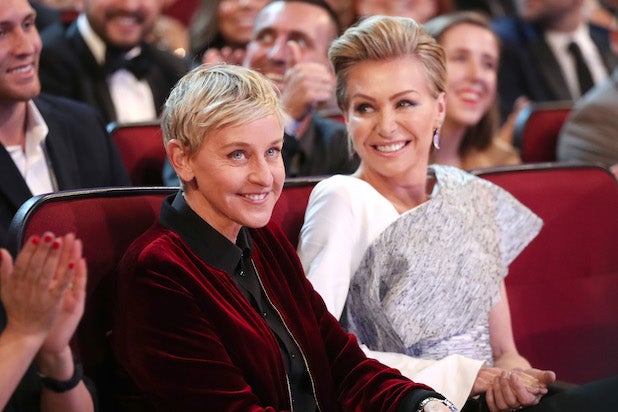 Ellen DeGeneres is considering quitting her syndicated daytime talker, “The Ellen DeGeneres Show,” and branching out because her wife, Portia de Rossi, thinks the comedian has “other things she could tackle.”

“I just think she’s such a brilliant actress and standup that it doesn’t have to be this talk show for her creativity,” de Rossi said in a DeGeneres-centric interview with the New York Times published Wednesday, ahead of the release of her wife’s first standup special in 15 years.

De Rossi says the Netflix comedy event, titled “Relatable” — marketed as a tongue-in-cheek takedown of the comedian’s approachable image — shows DeGeneres is “just a bit more complicated than she appears on the show,” adding, “There’s more range of emotion.”

“I wanted to show all of me,” DeGeneres says. “The talk show is me, but I’m also playing a character of a talk-show host. There’s a tiny, tiny bit of difference.”

The “Arrested Development” star thinks her wife could take on radio or a podcast, noting, “I don’t see the end of her show as her career ending.”

If DeGeneres does quit daytime, it won’t be right away, as she just extended her contract until Summer 2020. But the Times says the host was close to saying no to sticking with the show, which debuted in 2003.

And while DeGeneres’ partner wants her to quit, her older brother, Vance DeGeneres, is trying to keep her in that armchair a while longer.

“She gets mad when my brother tells me I can’t stop,” DeGeneres said of her wife, who appeared in the room mid-interview with the Times, after sustaining a concussion while horseback riding.

According to the Times, DeGeneres responded to Rossi’s remarks that quitting wouldn’t mean the end of her career by jokingly saying to her,  “You have a concussion. What do you know?”